Brittain created 27 lights including table lamps, hanging pendants and sconces for the Gemini Collection. She produced designs as pairs but made subtle differences between them, such as a knotted cord versus a braided cord, different sizes and lengths, and use of colour.

"Creating the Gemini Collection allowed me to play with the idea of what constitutes a twin: is it two separate objects?" Brittain said. "Is it one object that seems to have split into two parts? Are they mimicking each other?"

They are sold as individuals that she imagines as twins "separated at birth". Some are also grouped into threes, which the designer calls triplets.

Brittain took cues myriad of paired objects that appear in the natural world and pulled from those examples to create the works. "I think of my works as being creatures, or having a creature-like aspect, and there is something soothing about these pieces not being alone, of having a companion," she added.

"The final object stays close to its original inspiration, without sacrificing its essence through concerns about technical details necessary for production."

All of the objects were crafted by hand and use a variety of materials and techniques. Table Lamps feature diamond shaped hand-blown ivory glass shades, powder-coated stands and glow in the dark cords, one that is braided and the other is made up of a series of knots. 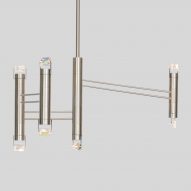 Tactile elements such as colourful, patterned climbing rope construct long electrical cords on Net Sconce, while strips of leather and suede add drape-like decorative elements to other designs in the collection.

Brittain's initially studied philosophy at New York University and then architecture at the Architectural Association in London. She then moved back to New York, and spent a stint working at architecture studio WorkAC, before changing direction by taking a role as a design director for lighting studio Lindsey Adelman.

Brittain told Dezeen she favours lighting design because it allows her to "be more obsessive with detail" in an interview in 2015.

Her other designs include a series of curving glass tubes that reference Japanese helmets and the Aries Collection which combines brass and prisms.