Barbie has listed her glamorous Malibu beach house on Airbnb for a lucky holidaymaker to enjoy this month.

The Barbie Malibu Dreamhouse is available for a two-night-stay next week to celebrate the 60th anniversary of the fashion doll, which was created by manufacturer Mattel in 1959.

Written as if penned by Barbie, the tongue-in-cheek Airbnb listing highlights the key features of the hillside property with its outdoor terraces, infinity pool and cinema room. The decor follows the aesthetic of the doll, with bold pops of pink and kitschy touches.

"With panoramic ocean views and beachy, glamorous decor, the home is a larger-than-life recreation of Barbie's signature style and hospitality," added Airbnb.

Among the defining features are the pink accents that range from painted walls and furniture inside, to balustrades and sun loungers outside. There is also a bright-pink, oversized large radio speaker that appears to be modelled on a toy version.

Barbie Malibu Dreamhouse can accommodate four guests, with access to two bedrooms, kitchen with dining, an office and craft room.

In addition to relaxing alongside the infinity pool that boasts uninterrupted views of the Pacific Ocean, the guests will be able to unwind in a stone-clad bathtub with windows that look out over  the California hills or spend time painting in Barbie's hobby room. 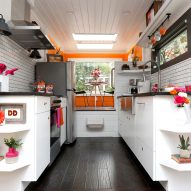 Hanging inside a massive walk-in closet are Barbie-style clothes – including several uniforms that catalog her fashions over the last 60 years. Styles include white cat eye sunglasses, an astronaut suit, a striped bathing suit and lots of high heels.

Along with living the Barbie life, up to four guests can also try out a myriad of activities that draw on the careers of varieties of the doll, such as fencing, exploring outer space and crafting.

"The quintessential Dreamhouse will bring to life what drives Barbie, from spotlighting powerful and diverse role models to showcasing underrepresented career paths and giving all girls a voice," Mattel said.

Visitors will have the opportunity to fence on the residence's rooftop with Olympic fencing medalist Ibtihaj Muhammad, who was recently made into the brand's first hijab-wearing doll.

Another opportunity is to cook a meal in the all-white kitchen using Barbie's signature pink appliances with local chef Gina Clarke-Helm.

Airbnb will donate to The Barbie Dream Gap Project GoFundMe initiative, which gives young girls the resources and support to follow their dreams.

Airbnb has previously worked with large brands to offer guests exclusive experiences. In 2017 the hospitality company collaborated with Pantone on a London home to celebrate Greenery, its colour of the year, and worked with Dunkin' Donuts to design a small, rentable cabin powered by coffee grounds.

Mattel has created several new Barbie lines in recent years, following criticisms over the thin-waisted, big-busted female dolls providing an unrealistic depiction of women, and its lack of cultural diversity.

These include Sheroes series, which celebrates inspirational women from around the world, such as Mexican artist Frida Kahlo and Australian conservationist Bindi Irwin. The Barbie Fashionista line, released in early 2016, includes curvy, petite and tall models.