Dutch architecture studio OMA has released images of Wafra Tower, a residential development on the coast of the Persian Gulf in Kuwait City .

When complete, it will be the studio's first built project in Kuwait. Set on the waterfront in the Hessa Al Mubarak district, Wafra Tower is a collaboration between OMA directors Iyad Alsaka and Reinier de Graaf, and local consultants Pace.

Green terraces will be planted on the tops of each block, which will feature sports amenities, swimming pools and diwaniyas – reception or gathering halls where Kuwaiti men can receive guests.

Roughly L-shaped, the wider base will maximise the number of apartments offered at lower levels while the stepped form will give the higher apartments wide views out over the gulf.

Corner apartments will have multiple viewing angles, and large penthouses will be including in the block alongside one, two and three bedroom apartments. 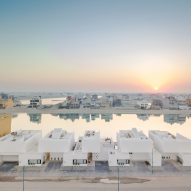 At ground level, the raised lobby will include lounge areas and co-working spaces that have sea views. Construction is due to start on Wafra Tower at the end of 2020.

OMA, which was founded by Rem Koolhaas, along with Elia and Zoe Zenghelis and Madelon Vriesendorp, in 1975, has recently completed a stepped glass tower in San Francisco, USA, and a residential tower in New York that features a prismatic corner.