Deep openings for windows and doors have been "carved out" of the pale brick base of this home in the conservation area of Hampstead, designed by London studio Stanton Williams.

Designed for a Swedish-Japanese couple, Fleet House replaces a former 1950s home and adopts the boundary wall typology typical of the area, updating it to be what practice terms a "modern domestic concept".

"We were particularly interested in reinstating the local tradition and developing the house around the idea of an almost endless boundary – one that at the same time shelters and generates the domestic space," explained the studio.

Described as a piece of "urban repair", the three-storey home re-establishes a former boundary that existed between a nearby historic footpath and Admiral Walk, to which the home's name of Fleet House alludes.

Within two lower brick-clad storeys and an upper storey clad with smooth white stucco, the home has an open-plan living space, four bedrooms, three bathrooms, a study and a ceramics studio, along with a Japanese garden.

"Acting as a textured protective shell, the boundary unfolds into a series of habitable spaces, gains thickness, hides and creates entrances, rooms and courtyards as it responds to its context," said principal director Patrick Richard.

"The boundary wall becomes the house."

Natural light and "breathing space" led the design of the interiors, where pale wooden finishes and white walls predominate. 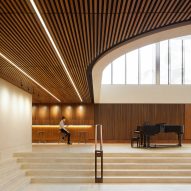 "Long perspectives and vestibules connect domestic moments - with light always guiding the journey, relating the inside with the outside," explained the studio.

On the ground floor is an open living, kitchen and dining space, where a large sliding glass door opens out onto a stepped terrace and leads down into the garden, designed by Bradley-Hole Schoenaich Landscape Architects.

The finishes of brick, stone render and bronze were chosen based on an analysis of the surrounding conversation area.

"Our aim was to create contemporary but timeless architecture, rooted in its context without pastiche," said Richard.

"We wanted to relate the house to the strong architectural elements of the neighbourhood, while keeping the building identifiable within its own era and its own narrative charge."

The master bedrooms occupy the first floor, where the set-back walls have created a small balcony space atop the brick base, overlooking the garden below.

Housed below on the lower ground floor is the gym, plant and storage space, also accessible from the garden via steps in the lower courtyard.

The practice, which was founded by Alan Stanton and Paul Williams in 1985, recently completed a major redevelopment of London's Royal Opera House, as well as a brick extension to the University of Cambridge's historic business school.

Photography is by Jack Hobhouse unless stated otherwise. 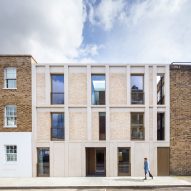