Larkins' An Egg Without a Chicken project was begun in response to the industrial farming practices that are used to keep up with the high demand for eggs – with around 36 million eaten per day in the UK.

"My project is a playful concept that is more open to debate than the oversimplified argument that 'animal is bad and plant is good', which is sometimes associated with veganism," she told Dezeen.

The designer set out to explore how design might be used to recreate or improve on the egg while not being limited by the biological capability of a hen.

In doing so, she altered their shape, by elongating them or moulding them into cubes. But she wanted her substitute to stay true to the original food's form – with a white and a yolk – to have a shell that cracks, to have a similar nutritional value and taste, and to require no birds in the making.

"In the face of climate change, we need to move away from intensive animal agriculture and explore alternative sources of protein," Larkins explained.

"There is currently a growing interest in veganism, and demand for plant-based alternatives is at an all-time high," she continued.

"Whilst egg alternatives already exist – either plant-based or grown synthetically in a laboratory – they neglect the essence of what an egg is," the designer continued. 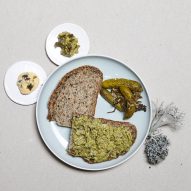 Julia Schwarz uses lichen to create food for after the apocalypse

Larkins presented the results of her egg experiment at this year's Dutch Design Week, which took place in Eindhoven from 19 to 27 October.

The key ingredient in her egg-less egg is a pea protein isolate, used to replicate the nutrients of a real egg.

She used Kala Namak salt – a kiln-fired rock salt used in South Asia – to reproduce the egg's "sulphur-like" taste, and an alginate – an acid found in the cell walls of brown algae – to create a yolk-like form that can burst like the real thing.

In some cases, she added a membrane layer to hold the mixture together.

To complete the "full egg experience", which includes being able to crack it, Larkins created a shell-like exterior by either dipping the egg in melted plant-based wax, and building this up in layers, or by forming two halves of a shell and melting them together.

While entirely animal-free products are often pigeonholed as suitable for vegans only, Larkins' project is aimed at both vegans (or vegetarians) and meat-eaters.

"Of course there are limits to what is worth imitating – and an egg without a chicken is definitely reaching the absurd – but I think that it's easier to persuade someone to make a change if you provide an alternative rather than saying to simply do without," Larkins told Dezeen.

"Some people who choose to be vegan still enjoy the experience of eating meat, and should be allowed a meat-like experience without having to defend themselves," the designer continued.

"Human desire to consume meat and animal products runs deep in cultures globally, and having an alternative that allows for an easy switch to plant-based products seems like a good thing to me," she added.

Larkins stresses that she is not trying to make a commercially viable egg product, but rather her recipe is a work-in-progress that proposes a solution to the problem of feeding an increasing population without putting a strain on the environment.

She hopes her egg substitute will allow space for discussions about the issues of food sourcing and production in the climate crisis.

"Throughout the experimentations it became clear that alternatives are not automatically better," she explained. "Some substitutes come with their own environmental impact and compromises in flavour, efficiency and form."

Larkins is not the first designer to experiment with plant-based alternatives to animal products. Graduate designer Julia Schwarz developed a range of nutritional food products made from a mossy fungus called lichen, for life after an apocalypse, or on Mars.

Elsewhere during Dutch Design Week, Amsterdam-based Studio Drift created an installation comprising 3,000 blue blocks, which each represent the plastic used to make an individual supermarket bag, to create a "three-dimensional index of consumption".