Dezeen promotion: judges in the Samsung Mobile Design Competition have revealed their pick of the top three accessory designs, whose creators have shared their inspiration in interviews with Dezeen.

From a longlist of five entries in the Next Mobile + category, the judges chose Alexander Rehn and Tobias Saller's Belt of Galaxy, Ece and Cagatay Demirpence's Fellas of Galaxy, and André Gouveia, Nuno Pires and João Pereira's Star of Galaxy designs for the final shortlist of three.

This category in the competition asked entrants to imagine new accessories that could enhance Samsung Galaxy devices such as smartphones, tablets and watches.

The jury, which included designers Stefan Scholten and Paul Austin, executives from Samsung's IT and Mobile Communications division, and Dezeen editor-at-large Amy Frearson, considered all five of the finalists' projects in a live judging session in London in late September. 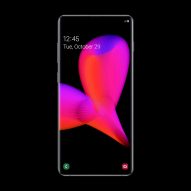 The top three contenders will now travel to the Samsung Developer Conference from 29 to 30 October in San Jose, USA – along with the top three finalists in the Next Mobile Wallpaper Paradigm category, which focused on screen wallpapers – where the winners will be announced. The top three deigns in the wallpaper category were also announced on Dezeen today.

As well as the awards ceremony, mock-ups of all ten longlisted works will be on display in San Jose.

Read on for interviews with the top three designers in the accessories category.

Ece Demirpençe, part of the team that designed Fellas of Galaxy

I am a mother of a four-year-old. Every night during story time she kept saying "Mommy, your story telling is lame and boring" – that gave me the basic idea for Fellas of Galaxy. The inspiration for this design is to bring children together with the right content. Fellas of Galaxy gives parents the chance to create a library for their children from approved content.

Fellas of Galaxy are children's products, so they have to be simple and clear. They are an abstract form of animals in a basic shape. They have few details, and are safe for children to play, hug or sleep with. The simple design also emphasises Galaxy Watch Active's screen as a mouth, which is essential to give gesture changes.

Fellas of Galaxy is operated by Samsung's voice assistant Bixby, thanks to Galaxy Watch Active. Bixby allows Fellas of Galaxy to be controlled by voice only, thus simplifying the usage for the child. Also, to get a safer approach for its audience, children, Fella's battery charges through a wireless charging system.

Since we are parents of the target user, we took into account her opinions and aspects in design stages. The product measurements and proportions were decided according to the Galaxy Watch Active, which is the perfect fit for the mouth form.

I am working as a design executive for a global packaging and paper company. As designers, we are designing sustainable, innovative packaging solutions to extend shelf life, improve end-user convenience, reduce CO2 footprint, etc. My co-designer Cagatay Demirpence is an interior designer and also my husband. He is a highly experienced designer, especially in UI design. We are thankful for this wonderful experience and great opportunity; it nourished our minds. We will strive for such exciting projects outside our individual businesses.

André Gouveia, part of the team that designed Star of Galaxy

Star of Galaxy is a product that reflects a seamless integration between software and hardware, giving people creative freedom to become the star of their experience.

First, the idea of working with a company like Samsung represents a huge opportunity for us. Second, our passion around the segment of consumer products and technological solutions. And of course, being a global competition co-organised with Dezeen, the exposure it could bring.

The inspiration behind Star of Galaxy came about from a well-known trend: collaborative robotics. Our goal was to create an accessory that would truly add value to Galaxy's devices, and likewise bring integration to the existing software developments from Samsung. So, we designed a device that becomes a real personal assistant for the user through collaborative robotics and a brain called Bixby.

Through Bixby, Star of Galaxy is more than a stand that follows you. It becomes a true personal assistant that collaborates with you in whatever you want. The articulated arm allows total rotation and tilt, captures everything using the front and back cameras of Galaxy's devices. This ability to follow you in every direction and the vocal recognition from Star, allied to the software integration, represents a leap in the market.

We analysed the visual language of Samsung and tried to design a device that could match the brand portfolio. The soft edges, the contrast between colours and materials, the friendly but technological look – they all aim to communicate the positioning of Samsung. We wanted to avoid the techie look of most robotic products, aiming for a more domestic product.

First, the notion of collaborative robotics. The idea that robots can collaborate with humans and not being expected to do everything alone. This approach makes a more friendly coexistence between humans and robots. Also, the trend on virtual personal assistants and artificial intelligence, using voice and facial recognition as the main interface between user and product.

After understanding the vision of Samsung on creating tools that empower people to be more creative, our ideation question came to be: how can we create a new accessory that empowers users' creative freedom, using their own devices?

After that, Star was thought to be a robotic stand for Samsung Galaxy devices that promotes new experiences and features. An articulated structure that follows and assists the user via face and voice recognition, through a seamless combination with Bixby.

Once the opportunity was identified, we started by prototyping the concept in a very quick way to validate the mechanical part of the system, and also to assure that it could fit in the Galaxy family devices. After that, we sketched different solutions and tested different combinations of materials, always having the Galaxy devices as reference. With the mechanics validated and the shape defined, the process of CAD and rendering started, supported by a clear storytelling that promotes an assertive way of explaining the concept.

At this moment we are developing a range of new products and strategies for sustainable packaging. In addition we have a constant presence in the area of motorcycle protections and accessories. In the near future we also want to work on clean energy and embrace more projects around sustainability, always being faithful to our approach: to design product experiences that make sense.

Alexander Rehn, part of the team that designed Belt of Galaxy

Belt of Galaxy is an easy product to keep your Galaxy family safe and easy to handle. It's an accessory which prevents your phone or tablet from falling.

There are a lot of smartphone accessories on the market available, but I wanted to create something new which helps users and adds an extra function. Also I like the challenge.

I wanted to keep it simple and don't want to distract the user from the design of the smartphone, so I focused on a minimalistic aesthetic.

Who is this design for?

It's designed for people with age-related weakness or people who follow an adventurous lifestyle, such as going to festivals, concerts, hiking, where your smartphone could be easily dropped.

My studio designs products with the approach to solve problems, to be functional and to house beauty.