Oliver Heilmer, vice president of MINI Design, explains how the brand updated the MINI Cooper design to create its first entirely electric car in this video produced by Dezeen for MINI.

The MINI Cooper SE is an electric hatchback recognisably designed in the style of MINI's iconic Cooper range, and will be available to purchase in 2020.

Heilmer emphasised that despite its electric update, the MINI Cooper SE is based on the same design principles that have guided the brand since its inception.

"The key features are the same as what made the original MINI so successful: a compact design and fantastic handling," he said in the video interview, which was shot by Dezeen in Munich.

A notable new addition to the design of the vehicle is the way in which it incorporates its electric batteries.

"Due to the fact that the batteries are at the bottom of the car, the centre of gravity is even lower," said Heilmer. "It feels really agile in curves, it feels lightweight. The battery will give you up to 145 miles on a single charge, and you can charge it up to 80 per cent within 35 minutes." 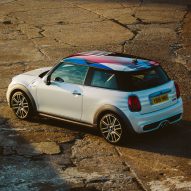 According to Heilmer, the aesthetic design of the car remains close to previous models of the MINI Cooper, deviating only for functional reasons.

Alterations to the design include a closed grille, because electric engines don't require as much ventilation as combustion engines, and wheels and mirror caps that have been updated to be more aerodynamic.

Also new to the design of the Cooper is an updated digital instrument cluster in front of the driver, which shows the remaining range of the battery and instant available power.

In addition, the car's satellite navigation system will now guide drivers to nearby charging points.

"It's a perfect new way of getting around in the city," stated Heilmer.

This video was filmed by Dezeen for MINI at the launch event of the MINI Cooper SE in Munich, Germany. All images are courtesy of MINI.