The all-electric MINI Cooper SE draws upon the brand's history of playful designs and superior handling says Oliver Heilmer, vice president of MINI Design, in this video produced by Dezeen for MINI.

The MINI Cooper SE is the brand's first all-electric car, designed in the style of MINI's iconic Cooper range.

The launch of the vehicle follows the 60th anniversary of the first MINI in 1959.

"The original MINI was designed in the 50s by Alec Issigonis with a simple, compact, stylish design," says Heilmer in the video interview, which was shot by Dezeen in Munich. "It would become the best selling car in British history." 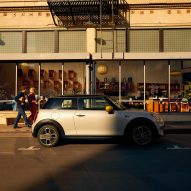 The car quickly became a style icon, and was adopted by a host of celebrities.

"Everyone from Mary Quant to Steve McQueen could be seen in a MINI at that time," asserted Heilmer.

The Cooper tag was introduced when John Cooper, a builder of racing cars, collaborated with Issigonis to create a performance version of the vehicle for motor racing.

Accoring to Heilmer, the MINI Cooper SE draws upon the brand's prior designs as well as its history of performance handling.

"This combination is what BMW aimed to capture when it relaunched the MINI in 2001, which culminated in the MINI Cooper SE that we are launching this year," he said.

"We kept the MINI spirit of fun and adventure, which is why for over 60 years people have fallen in love with the car".

The MINI Cooper SE will be made available to purchase in March 2020.

This video was filmed by Dezeen for MINI in Munich, Germany. All images are courtesy of MINI.