Azusa Murakami and Alexander Groves of Studio Swine discuss their approach to design and the work they are currently undertaking as part of a residency at Brooklyn creative space A/D/O, in this movie produced by Dezeen for MINI.

The London-based duo – Japanese architect Murakami and British artist Groves – are currently working from the A/D/O design hub that was founded by MINI in Greenpoint, Brooklyn, as part of its designer-in-residence programme.

The residency will culminate in an exhibition at the venue in January, featuring new works informed by the studio's time spent in New York.

"We'll be exploring the idea of how technology and ephemeral materials can synthesise," Groves says in the video, which was shot by Dezeen at A/D/O. "We're working with plasma, fog and light."

Nate Pinsley, global managing director at A/D/O x MINI, says that the designer-in-residence programme is mutually beneficial for the venue and the visiting designers.

"ADO is a creative hub created by MINI that brings together people from all sorts of backgrounds and disciplines who are interested in exploring the future of design," he says.

"The residency allows us to explore a little bit more broadly, and invite a talented team like Alex and Azusa to come in and explore the topics they want to explore."

Designers enrolled in the programme are able to make use of the creative facilities that A/D/O offers. "We provide space, access to fabrication tools, and we also provide access to the community," Pinsley explains.

Studio Swine has become known for its interdisciplinary approach to design and globetrotting projects, and the duo spoke about their work at a talk hosted by Dezeen and A/D/O in October 2018.

"We come from different backgrounds of art and architecture," explains Murakami. "We do a range of projects around the world that deal with telling a story which manifests in an object at the end."

"We're very eclectic in the materials we use, the processes, the places," adds Groves. "But one thing that is consistent is our approach. It's very research-led." 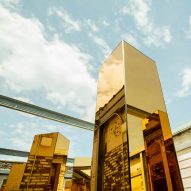 "You go to a place and you just immerse yourself in a situation, and then you become a conduit for creating something new but also that's very of the place."

The studio's previous work includes a chair that was fabricated at sea using ocean plastics, a series of objects made using human hair purchased in China, an installation featuring a metal tree that produced smoke-filled bubbles, and a huge ceramic sculpture installed at the Eden project that emits scented mist.

While each of the projects has resulted in a physical object, Groves and Murakami believe that the narratives that surround their work are equally as important as the end result.

"We see everything as part of one piece of work," says Murakami. "We don't separate object, film, installation."

"It's really all about creating a world that you can immerse yourself in."