The concept was submitted by Vergopoulou in response to the Dezeen x MINI Living Future Urban Home Competition brief, which asked Dezeen readers to design a home that would address the challenges cities could face in 100 years time.

In her proposal, the UK-based architect imagines an "economically and politically uncertain" future in which resources are scarce. She predicts that this would lead to the emergence of a new DIY movement, and spark innovations in construction technology.

Traditional building materials such as brick and concrete would be replaced by bioplastic, a renewable material derived from agricultural bi-products.

The material's ingredients would be harvested from organic matter such as sunflowers, potatoes and apples, which would be grown on site by the buildings' occupants.

Vergopoulou said this would would make Cocoon BioFloss "accessible and affordable", as well as sustainable.

Cocoon BioFloss buildings would be completed in two stages. Sheets of the material would be layered over wire frames to create a weatherproof, translucent shell.

Then, the inside surface of the shell would be sprayed with extremely fine fibres to create what Vergopoulou describes as a "candy floss web". These fibres would also be used to create the building's internal walls.

The kitchen of each residence, situated at the heart of the unit's floor plan, would double as a laboratory where bioplastic production would take place.

"It is the most important part of the house," Vergopoulou told Dezeen.

The other rooms of the house would be strategically located around the kitchen. Their configuration would be influenced by the site's sun path and location of natural resources.

The internal layout of each housing unit would be unique to both the site and the individual requirements of its occupants. 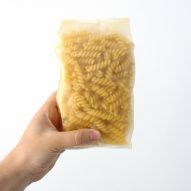 Vergopoulou envisions that the Cocoon BioFloss units would be arranged in a circular grid formation to accommodate allotments where the ingredients for biomaterial production would be cultivated.

Due to its flexible and self-sustaining nature, the BioFloss material "could be adjusted to adapt to many locations and climate conditions," Vergopoulou said.

The architect hopes that the construction industry will start to combine innovation with consideration for the environment and start to "think outside of the traditional methods of fabrication and materiality".

"For decades we have overproduced and over-consumed in terrifying amounts," she said.

Cocoon BioFloss competed with over 400 entries from 56 different countries before being selected from a shortlist of 15. The proposal proceeded to claim third prize in the competition behind The Kentish Classic and Hour Glass, which were awarded first and second place respectively.