Seubert and Alfredsdottir based the design of the Corrugation Lights on techniques used to manufacture some of the most recognisable examples of midcentury furniture.

In particular, the designers explored the process of moulding plywood veneer, which was used by many postwar designers to create furniture with curved, organically inspired forms.

"The collection takes veneer forming as a starting point – a process that requires skilled craftsmanship, which was introduced to the furniture world by design names like Alvar Aalto and the Eameses – and pairs it with off-the-shelf aluminium tubes," the duo explained.

"[This creates] a snug fit where the hard, powder-coated metal meets the soft, wavy wood and gives the pieces a pleasant contrast."

The series of suspension lights and wall-mounted sconces feature wiggly plywood elements that enclose the metal tubes. A simple frosted bulb projecting from the base of the tubes provides the illumination.

When used together in pairs, the moulded wooden pieces form a single unit that can be attached to the wall and used as a simple sconce.

Additional sections can be fixed to the wall to act as a bridging element connecting multiple sconces. This offers the potential to create fixtures that span entire walls.

The wooden forms can also be combined linearly to make suspension lamps that can incorporate any number of light fittings.

The aluminium tubes come in a range of five colours, and the ash veneer can be lacquered to match these hues or left in its natural finish.

Seubert and Alfredsdottir both studied on the Design Products course at the Royal College of Art and now share a studio in east London, which prompted them to collaborate on this first project together.

German-born Seubert studied in Bolzano and Paris before moving to London. His work focuses on material experimentation and is inspired by history and contemporary art.

Seubert's previous projects include a stool made from standard anodised-aluminium profiles with a hand-woven wicker seat, and a pencil tray with a fluted interior.

The designer recently updated his Anodised Wicker collection by adding new finishes, including a grey that references the metal's industrial character and a more luxurious mirror-polished version. 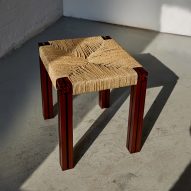 Theodora Alfredsdottir studied at the Iceland Academy of the Arts in her home country before coming to London.

Her products often attempt to communicate something about how they are made. This is the case with her stackable Mould side tables, which are made from ceramics using a single mould.

"The project studies if achieving uniqueness within a standardised process can add value to the final outcome," Alfredsdottir explained.

"A mould that consists of three parts in shapes based on a square, triangle and circle can be stacked differently each time a new piece is cast, which results in all unique pieces."

The moulds can be used to slip cast or press-mould ceramics, resulting in unique forms that are topped with a piece of glass to create a functioning table.

At the 2016 edition of the DesignMarch event held in Iceland, the designer exhibited a dining set intended to highlight the properties of feldspar – the world's most abundant mineral.

Photography is by David Wilman.