Three sets of work based on the Beirut-based designer's personal experiences make up the Transition exhibition, which recently opened at the gallery in Chelsea.

"All my work has been related to my own personal observations, but I was always distant with my works, where they were in a sense always inspired by material, or sight, or context," El Zein told Dezeen.

"These objects were my way to understand these feelings and these emotions. In a way it was quite therapeutic as well."

The first series she created is the Distortion benches, which Friedman Benda presented at The Salon Art + Design 2017 fair in New York.

Each of the four minimal furniture pieces has a mound protruding from its flat surface, supported by thick cylindrical legs. The smooth rounded forms are various sizes, and reference how the body changes during pregnancy.

"The Distortion benches talk about the transformation of the body... of the physical distortion of the pregnant belly," said El Zein.

"It's not only about pregnancy, it's about a contrast between a form that is extremely sensual, and a shape that is very rigid. The paradox between these two."

On each bench, the bump is located in a different position – sometimes creating an obstacle between sitters, and in one instance shifting the visual weight to one side.

"Benches are usually objects that are made for more than one person, so I also played with the idea of separation between different people," El Zein said. "The distortion creates that separation."

The designer chose to make the benches from fine white concrete, to create a cold yet smooth finish. The absence of colour is intended to draw focus to the shapes, "so they act more like silhouettes".

El Zein's second series, titled Fragmented Pillar, includes three vertical stacks of rounded white blocks. These blocks vary in shape and size, resulting in precarious-looking towers that appear as if they might topple over at any moment. 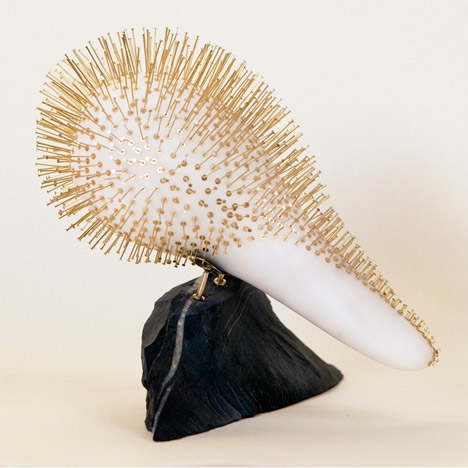 "[The set] is inspired by the metaphor of the pillar, which represents the foundation of any given entity," the designer said. "A building cannot hold together if the pillar is not carrying it."

"They ended up looking like human figures, but this came very spontaneously," she added.

El Zein also produced a collection of individual blocks, which act as small tables. All are cast from a plaster and sand mixture, and have an uneven texture across their surfaces.

"They're also white, but they're quite different from the benches because the material is... less homogenous in the finishing, which gives a certain idea of confusion," she said.

"I wanted a material that I would never be able to know the final finish once it was cast."

The final and most recent series is called Seduction, and comprises several sculptures that pair a "male" and "female" object.

"The two other series are internal feelings and experiences, whereas Seduction is the first time that there's an allusion to the connection to the other," El Zein said. "That's why each is composed of two pieces."

Intended to be viewed in sequence as a love story, the set of pieces begins as two independent items, which slowly become entwined as the seduction progresses.

The first designs are made from hard travertine, while the last and largest is carved from softer sandstone – alluding to the transition of emotions in a relationship.

"The material is so important in getting to the final shape," El Zein said. "I would never be able to have those sensual marshmallowy forms with travertine."

Transition is on view at Friedman Benda, 515 West 26th Street, from 28 February to 13 April 2019. The gallery's recent exhibitions have included presentations of designs by Chilean collective GT2P, and American artist and designer Misha Kahn, as well as a showcase of furniture by architects like Frank Lloyd Wright, Luis Barragán and Oscar Niemeyer.

El Zein's previous projects include an installation of 5,000 paper windmills in a doorway of London's V&A museum, and a set of "pleasure tools" created to stimulate the skin.

Another exhibition of designs by a Beirut-based studio, David/Nicolas, is currently on show at Carpenters Workshop Gallery in New York.