The videos accompany the tracks on the hip-hop duo's latest album, which they compare to audiobooks or graphic novels.

Each animated video has a similar format. A figure with its face obscured stands holding an implement in front of an inked calligraphy backdrop with the wind blowing around them.

Meanwhile, animals run across the screen from right to left. The animal silhouettes are made up of rapidly shifting collages of vintage print advertising.

"As a musical project, the animation loops resemble an inside look on the soul, an astral plane," said Machaidze, who is one half of KayaKata along with Jishkariani.

The pair collaborated with Nick Sabanadze who produced all the beats for the tracks.

The musicians, who rap in their native Georgian, made the animations themselves and uploaded the resulting videos to YouTube.

"There were no professional animators involved in the project we did it on our own," explained Machaidze. "We look at all of this as the same process it is as much an art project."

The pair work across various different creative industries. Jishkariani runs a chatbot company and is the author of a bestselling science fiction book.

Machaidze recently designed a range of outsized jewellery made from found objects, such as tennis balls and industrial Soviet ceramics. He also works as an interior designer, and sculptor, and provided art works for rooms and lobby of the Stamba Hotel in Tblisi. 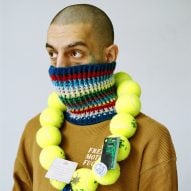 "That is how we see KayaKata," said Machaidze. "We work in many different media and study the ways of this world and then we work on accumulating and translating all we learn into tracks."

The first track, Massaia, features a figure in green trousers and a black t-shirt wearing a tennis-ball necklace and a scarf around their face. They are standing in front of thick yellow calligraphic lines, holding a specially adapted electric-drill.

"The calligraphy artworks are mine," said Machaidze. "I see them as mazes that I do not create but find like archeological artefacts, like they have been there and I'm just cleaning off the dust."

The animators chose unicorns to run across the screen for the first track's video. In later tracks birds, dogs, monkeys, gazelles and foxes are featured.

Machaidze styled the figures in each animation, with the help of his wife fashion designer Iri Todriashvili. Each figure holds something in their hand, ranging from a figurine of Star Wars character Chewbacca to a knife.

"We see the tracks as helpers or tools or prayers, every track is like an archived file and each person has a different method for unfolding and finding the data and the emotions accumulated in the tracks," said Machaidze.

The current album is just one part of a larger "carbook" that will be made up of four albums and a number of bonus tracks.

The word carbook is pronounced "qarbuqi" in Georgian, which also translates as storm, giving the name of the project a double meaning.

"We released one of a few chapters from the carbook," Machaidze explained. "We see our music like audiobooks or graphic novels or animations, because they are closer to the feelings you get when you read literature and comics."

Machaidze and Jishkariani have since given 10 professional animators access to a large workspace in Tblisi in exchange for working with them on future animations, as they develop their project.

Machaidze is part of a growing architecture and design scene in Georgia. According to creatives, hotel group Adjara is "playing a crucial role" in encouraging this cultural renaissance.

Earlier this year the Georgian capital hosted the first Tbilisi Architecture Biennial, which was described as a "hopeful moment" by keynote speaker Reinier de Graaf.