A multifunctional furniture unit made up of raised plywood floors and pegboard walls allows residents in this public-housing complex in Osaka to customise their apartments.

Nmstudio Architects – who worked in collaboration with Nozoe Shimpei Architects – was invited to create four apartment prototypes for the renovation of a Danchi (a public-housing complex) in Senri, Osaka.

The 14-storey building was originally constructed in 1979 and contains 246 identical apartment units.

"The housing complex was built after a period of high economic growth, and it was a roomy plan compared to the original development of Senri New Town," said Nmstudio Architects.

"However, the floor plan, which assumed the lifestyle of the nuclear family at that time, was designed for modern life as it was 40 years ago."

The studios wanted to create apartment layouts that catered to a wider range of occupants and lifestyles.

"The purpose of this project was to gather a wide range of residents in this old housing complex," Nmstudio Architects explained. "We designed four prototypes and ten units in total."

The studios' concept is based around a large piece of multifunctional, space-saving furniture that allows residents to create their own room layout, regardless of the size and shape of their apartment.

"The uniqueness of the residents is the most important thing we and designed these apartments to emphasise it," added Nmstudio Architects. "We wanted to create housing-units that could accommodate a wide range of lifestyles." 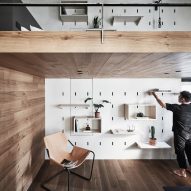 One or two plywood units called "shima" – the Japanese word for islands – were then installed in each apartment.

Used to "gently" divide the space, the islands have customisable walls, floors and compartments that can be used in a number of ways. The units can be used as a single room or can accommodate several functions such as a bedroom, dining area or office.

The floors of the Shima units are 30 cm high and hollow. These double as storage, while the perforated walls function like pegboards allowing residents to hang shelves and hooks for storing and displaying objects.

Curtains can be installed to create areas of privacy while a recessed U-shaped compartment can be used as a wardrobe, or if fitted with shelves, a small desk area.

Cushions on the edge of the unit function as seating while a mattress turns it into a low bed.

"Residents can lie on this Shima and relax with their favourite things displayed on the Shima walls," said Nmstudio Architects.

"This is a place that allows flexibility for the residents to use freely. These small housing-units gradually turn into comfortable living scenes."

Nmstudio Architects is not the first studio to design a multifunctional furniture island. In 2009 Nils Holger Moormann created a space-saving unit that contained sleeping, eating and working areas for those living in micro-apartments.

Photography is by Koji Okumura from Forward Stroke.