Israeli designer Yaara Nusboim has developed a series of wooden toys in collaboration with child psychologists, that can help kids process difficult or repressed emotions as part of the therapeutic process.

Each of the six Alma dolls corresponds to a different feeling – fear, pain, emptiness, love, anger and safety – and is designed to be used as part of play therapy.

In this method, pioneered by psychoanalyst Melanie Klein in the 1930s, children are encouraged to work through their experiences via the medium of play rather than conversation, while being guided or supervised by a therapist.

"Toys, not words, are the language of a child," Nusboim explained. "Playing with a toy provides a safe psychological distance from the child's private problems and allows them to experience thoughts and emotions in a way that's suitable for their development."

"The therapist can observe the choices the child makes – which toys they pick, the way they play, the concept of the game – and through them the therapist can learn about the child's mental and emotional state," she continued.

But despite this being an established method in paediatric psychology, Nusboim discovered that the practice still largely relies on generic toys, rather than ones specifically designed for the purpose.

So over the course of a year, she worked with seven child psychologists and different kids to trial prototypes, in order to create a set of dolls that would actively contribute to the therapeutic process.

One key takeaway was that the toys needed to be interesting enough to play with, yet as abstract as possible to enable the children to project their own thoughts and feelings onto them.

"All of the dolls are open to interpretation, which will depend on the child's backstory and the treatment method," said the designer and Shenkar College graduate.

"The therapists explained to me that children see themselves in the dolls, so I decided to convey various possible emotions they could feel by means of using different materials."

Each toy is made of polished maple wood, a warm, gentle material that stands in contrast with the silicone inlays in playful colours and textures.

The love doll, for example consists of two spheres, a smaller stacked on top of a larger one, separated by a soft pink collar. 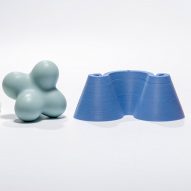 "It represents the longing for a hug, for human touch," Nusboim told Dezeen.

"It's unexpectedly heavy, which speaks to the feeling of stability, while the flexible part is designed to promote touch and caressing so that, hopefully, the child will feel a closeness to the doll."

Anger meanwhile is expressed through a small, compressed shape to suggest bottled up rage, with red silicone thorns protruding from its body as if begging to be released.

"This contrast of materials can help children understand that they, like the dolls, are composed of both positive and negative experiences and that there is nothing wrong with that," she continued.

At the moment, Nusboim makes each doll herself – cutting and engraving the wood using a lathe and milling machine, before 3D printing the silicone – but she hopes to industrially manufacture them in the future to make them more widely available.

Elsewhere, designs recognising the transformative power of toys include a series of tactile objects that help the sensory development of children with autism, and an AI gadget that can lengthens kids' attention spans.