Product-design engineer Dougie Mann has created a keyboard that, when hooked up to a smartphone via a custom case, can help amputees and people with sight loss type more easily.

In a world of sleek, homogenous touchscreen surfaces, the 3D-printed device brings tactility back into technology through five physical buttons, which are used to communicate all 26 letters of the alphabet.

Four of these are lined up along the bottom left side, while a single one in the top right-hand corner can be operated with the thumb.

"Instead of pressing each letter individually when typing a word, you press different combinations of buttons," Mann told Dezeen. "So for example, pressing your thumb and middle finger buttons would print the letter H."

This means that the case can be operated without looking and with just one hand using a methodology similar to playing a guitar, wherein each letter, like a chord, requires a certain finger placement.

In order to operate the device, users will first have to memorise how the different hand gestures correspond to the alphabet.

"There is no doubt it will be hard to learn, but I have tried to make the learning process easier by creating a graphic that overlays the chord combinations onto the letters," said Mann.

"Combining the imagery of it with the practice of typing, I believe anyone can learn it it just a few hours. When mastered, I think it will be just as quick as two handed typing on a regular keyboard."

On a technological level, the case works largely via bluetooth.

"Inside the housing is a small circuit that hooks up the button inputs with the Adafruit Feather module – a bluetooth micro-controller that allows me to convert this information into keyboard data and send it to a computer or smartphone," said the designer.

"Being bluetooth, it means that any smart device is able to be controlled by it, and it requires no additional app or software on your device." 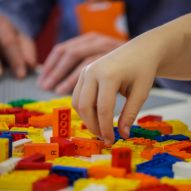 Mann has also started developing functionality that allows people with visual impairments to read using TypeCase, via small, haptic motors under the buttons which vibrate to signify different letters.

Crucially, Mann also thinks there are a wide range of other applications for the product.

"The intention was to design something inclusive, so that it wasn't a stigmatising product restricted only to people with impairments," he explained.

"It's just a handy gadget, something to play with. I think it might help people lift up out of their screens. It would allow you to walk down the street while typing, or make notes while making eye contact with someone."

TypeCase is Mann's graduate project from a joint masters between the Royal College of Art and Imperial College London, and the result of a student grant by manufacturing company 3D Hubs.