Infographic and research project Anatomy of an AI System, which reveals the social and environmental consequences of voice-assistant devices, has won Design of the Year 2019.

The project, by Kate Crawford and Vladan Joler, won the digital design category and went on to scoop the overall Beazley Design of the Year Award, which is organised by London's Design Museum.

The project beat a school library in India, an Adidas clothing collaboration and a bus designed by Muji.

Crawford and Joler's project looks at the amount of human labour, data and resources that are required during the lifespan of just one device from manufacture to disposal, using the popular Amazon Echo device as an example.

"You will never look at your smart home hub the same way again," said chair of the judges and Royal College of Art vice-chancellor Paul Thompson.

A diagram demonstrates the impact of the device on a global scale, from extracting metals from the earth necessary to build it and the resulting environmental effects, to the personal data about the user that the device gathers.

This is supplemented by an essay explaining the connections and real-world effects of the device.

"It is honesty of materials applied to technology," said designer Martino Gamper, one of the six judges, describing it as a "prototype" for how we understand the impact of technology.

"The transparency here is incredible," he continued. "I have not seen AI mapped in this way before."

The project also highlights the huge wage disparities between executives working in the industry and the children employed to extract minerals, who would have to work 700,000 years to earn the same amount. 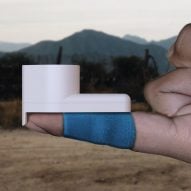 This is the second consecutive year that a research project rather than a building or physical product has won the award, following research agency Forensic Architecture's award last year for the work displayed in their Counter Investigations exhibition at London's ICA.

Like Crawford and Voler, Forensic Architecture were also the winners of the digital design category, suggesting that this is an increasingly important area for designers.

"AI is such a prevailing feature of the future of technology it seemed the perfect moment to analyse its impact, which this project does," said Thompson.

"In the future, when you purchase a piece of digital hardware it could have the ingredients listed," he continued. "This project shows how this might look and makes everyone who sees it think about all the unseen impact of tech hardware."

Judging the 76 nominated designs up for the award alongside Thompson and Gamper were Wallpaper magazine editor Sarah Douglas and British-Nigerian designer Yinka Ilori.

Melissa Hajj, product design director at Facebook, and Damien Wilson, the creative director of shoe brand Dr. Martens, made up the remainder of the six-person panel. The judges named winners in each of the six categories before choosing an overall winner.

Sameep Padora and Associates won the architecture category for the Maya Somaiya Library, a school library in Kopargaon, near Mumbai, in India.

The design of the building allows the children to walk and play on its roof. Ilori praised its "elegant design that was all about community" and stressed that it fulfilled the dually important purposes of leisure and education.

In the fashion category, the winner was a collaboration between sportswear brand Adidas and designer Ji Won Choi that mashes together the silhouette of traditional Korean clothing and the brand's tracksuits.

Hajj described it as a "very cool collaboration", going on to say that it won "because it is using a traditional design language in a new way".

"It's a rare thing – a genuinely interesting and fresh take on sportswear," said Hajj. "It plays with proportion and is a wonderful use of pattern cutting."

In graphics, the award went to Sascha Lobe at Pentagram with L2M3 for their branding, graphics and signage of the new David Chipperfield-designed headquarters of beauty and cosmetics company Amorepacific in Seoul.

"Wayfinding is one of the most challenging areas of graphic design to get right and this execution is both exquisite and clever," said Douglas.

"The simple four-sided map that relates the building back to its surrounding river, mountain, park and city means that you always know where you are in the building," she said. "It's both sensitive to the architecture and highly functional."

The winner of the product design category was Hans Ramzan for the simple HIV-detector Catch. The low-cost, self-testing device is designed for users in emerging countries who may not have access to healthcare for early diagnosis.

Thompson pointed out the design "will help save lives" and shows how design can have a positive impact.

"This design will be particularly helpful where stigma still exists around HIV and AIDS and where cost is a barrier to diagnosis," he said.

Muji was the winner in the transport design category, for a self-driving shuttle bus created with Finnish autonomous driving company Sensible 4. The bus functions in all weather conditions, which Wilson praised as "helpful, efficient and cute".

Visitors to the exhibition of all 76 nominees, which runs until 9 February 2020, chose My Sleeve by Marie Van den Broeck as their project of the year. The silicon cover for the handles of crutches is designed to make them more comfortable for users.

Outgoing Design Museum director Deyan Sudjic described the awards as a "vital part" of the museum's output. He praised the awards programme for bringing to the forefront "the most revealing, intriguing and exciting new design from around the world".

Images are by Felix Speller for the Design Museum.