After more than a year of prototyping, Savannah studio Donttakethisthewrongway has unveiled its design for a chair that consists of a single cardboard box.

In order to make it stand the test of time, it has been carefully "over-engineered" to be resistant to both wear and water.

"I think a cardboard box has the potential of being a chair without trying to," explained Eric Primo, one part of the three-man collective which also includes Nick Wargo and Crawford George.

"An accidental chair – maybe not better but a different kind of a chair," he said. "It is strong yet light, and it is essentially always 'packed' so moving or shipping it is quite easy."

Turning the cardboard box into a seating design that would meet the trio's strict demands for quality and durability was a labour intensive process.

"We made several chair prototypes, all with varying structural components. They were used as chairs for over a year," Primo told Dezeen.

"During that time, they were opened periodically to inspect their internal and external wear. We paid close attention to how each wore over time and tweaked the design based on what we learned."

The final design takes the form of a simple cube in classic cardboard brown, adorned only with a few flourishes like the words "this closed box acts as a chair" emblazoned on the side, alongside signposting to help users discern the bottom from the top.

On the outside, the box reveals little of the days-long production process that goes into every piece.

"Each chair is handmade in our studio and begins as a double corrugated-cardboard-box die cut, that is then folded into shape," said Primo.

"Custom scoring tools help form sharp corners and edges before each flap of the box is flattened using a foot roller to allow it to sit flat and square on the ground," he continued. "The chair's bottom flaps are then glued with PVA glue and pressed together."

An internal cardboard grid structure is added for stability and to help the box keep its shape throughout use. Then, the other flaps are glued shut before a cushion is glued to the top, which is especially engineered to be both comfortable and resistant to denting.

"The cushion consists of three sheets of corrugated cardboard which are laser cut, flattened with a foot roller and glued separately with wood glue," he explained.

"At each stage of the gluing process, boxes are clamped for 12 hours and after that they are sanded and the feet screen printed along with the other graphics." 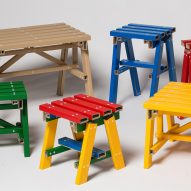 Flat-pack Lumber table is made entirely from cardboard

The trio tried out various water repellent coatings throughout the prototyping phase and finally settled on a silicon dioxide spray, which is added as the last step.

Also attached to the bottom is a shipping label, a nod to the role that cardboard boxes play in all of our lives.

"Online shopping has drastically changed how we buy anything," said Primo. "And we felt like if there would be an iconic object to represent online consumer culture, it would be the cardboard box that transports objects from the internet to your doorstep."

"Although it's hard to know what to expect from a product bought online, the cardboard box is quite consistent in form and performance," he continued.

"By over-engineering it, we wanted to communicate that there is a lot of potential in the functional aspect to this product rather than it just being a convenient way to transport other products."

Elsewhere, cardboard has been used to create a flat-packed table, a ceiling light and even an entire restaurant.

Photography is by Adele Trefry.