Brazilian firm Reinach Mendonça Architects Associados has added a geometric concrete pavilion to a family home in São Paulo, offering a place for reading and entertaining.

PK Residence Annex is built on the property of a residence in the Brazilian city, which is complete with a separate concrete volume attached to a garage for barbequing.

"The family decided to acquire the neighbouring land to expand their garden, build leisure spaces, live together and house part of their collections of works of art," said Reinach Mendonça Arquitetos Associados (RMAA).

The detached concrete volume is designed without any right angles to add to the geometric form. Its shape is defined by a slanted roof topped with grass, that joins a wall that encloses a small courtyard.

"This sloping roof volume turns to the back of the lot with its highest facade and forwards with its lower face, exposing its green roof to the street," said the local studio.

RMAA chose the angular design to contrast with the main residence, which is connected by a covered walkway.

"The aim was to make clear the differences both in time and in the function of the new spaces," the studio said. "We sought to impress the feeling of being elsewhere, to practice other activities, even being part of the existing residence."

The exterior barrier connects to the sloped roofline of the annex by a slender concrete beam, to create a small courtyard. Nestled in between the barrier and the unit is a black sculpture by the late Brazilian artist Maria Martins.

"The sculpture had its implantation studied so that it could be seen from different angles and lighting further enhances the scene created there," the studio said. 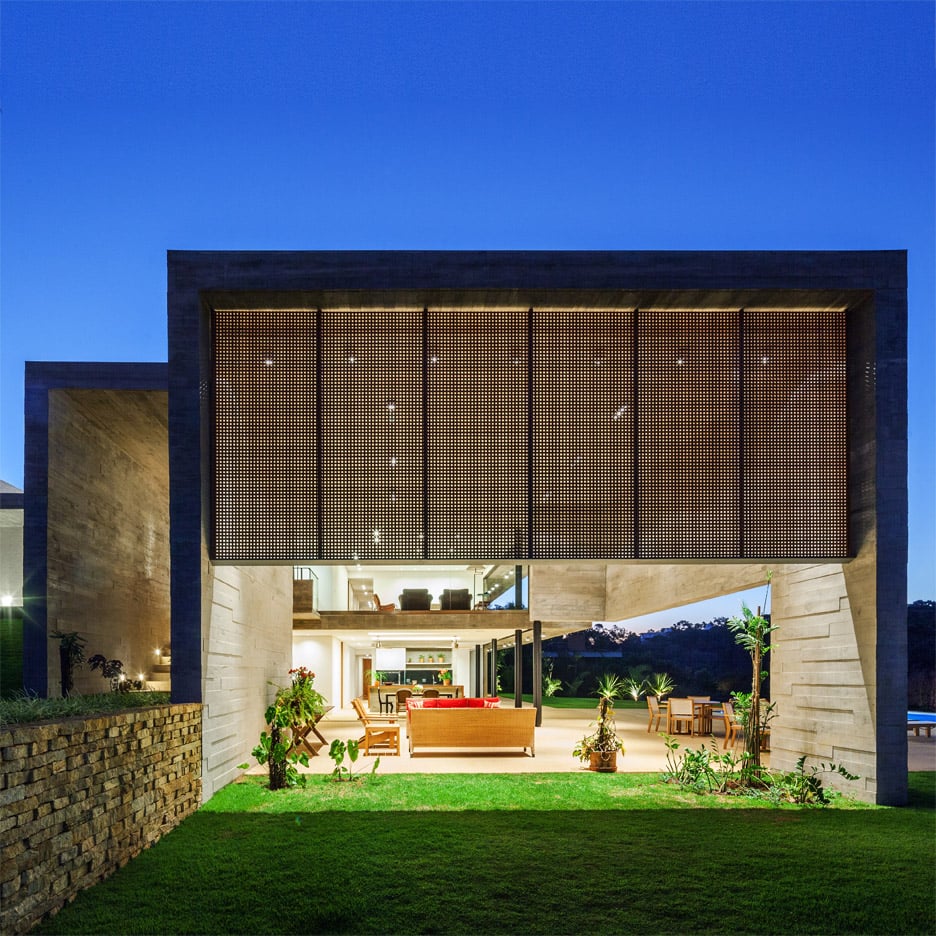 Greenery drips over the entrance of the 145-square-metre structure, which is defined by a bold red wall.

The interiors comprise exposed concrete walls and concrete slab floors that extend to an outside area. This space is covered by the roof as it extends out to rest on black pillars.

Inside, PK Residence Annex has an open-plan living area for the family to watching movies or entertain guests. A white sofa and wood rocking chairs furnish the space.

The room also includes wooden bookshelves and a desk to study, work and read under a round skylight. There is also a bathroom and a wine cellar.

Based in São Paulo, Reinach Mendonça Arquitetos Associados was started in 1987 by architects Henrique Reinach and Mauricio Mendonça. The studio has also built a two-storey linear concrete house in Brazil, divided into a "night floor" and "daytime floor".

Other houses in São Paulo are Casa Neblina by FGMF Arquiteto and NVD House by Studio Arthur Casas.

Photography is by Nelson Kon.