Moving shutters of corrugated plastic shade this drawing studio pavilion in the Illawarra Escarpment, Australia, designed by Takt Studio as an extension to its workspaces.

Located on a slope and abutting a large retaining wall, The Drawing Room has a long, thin footprint of 1.8 metres by 6.4 metres.

It provides a meeting and work space for Takt Studio, along with a coffee kitchen and a storage space.

A path of decking hugs the contour of the slope, and leads to a series of steps up the hillside that connect to the studio's other buildings.

"The project was developed as part of a townscape rather than an extension to another building," said the studio.

"This tiny build explores the possibility of fine-grained, highly functional interventions on a site between the suburbs and the bush, where living and working are closely interwoven."

In order to maximise the connection with the garden space in front of the structure, the facade's windows have been given deep frames that double as seating areas above a thin strip of decking.

Due to the temperate climate of the area, the translucent shutters that can be lowered to cover these windows are often left open, bringing natural light and air into the workspace.

"The drawing room exists and an open verandah, an edge to the garden, with veiled views across the ocean or at night to the lights of the city below," said the practice.

At the rear of the space, clerestory windows placed above the retaining wall filter further light down into the spaces, which are framed by the structural ribs of recycled dark hardwood.

The mono-pitched roof space, which sits at the level of the road above, has been used to create an easily-accessible storage area. 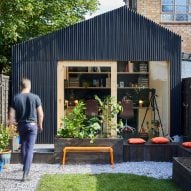 A sloping roof lined with corrugated metal minimises the roof's impact on the ability of sunlight to reach the garden below.

Blackboard walls cover the front and rear elevations, intended to create and area where local friends and children can personalise the studio with their own artwork.

Fibre-reinforced cement panels have been used for the rest of the cladding, as well as for flooring and lining, in what the studio call "an exploration of simplicity."

"The space remains spare, and ready to be filled with project discourse, reading, lunching, drawing and imagining," said the studio.

Takt Studio was founded in New South Wales by Brent Dunn and Katharina Hendel. The practice recently made similar use of simple, industrial materials to encase a 1950s brick bungalow, also in Illawarra.

In the UK, Invisible Studio also used corrugated plastic to create a prototyping workshop in the middle of the woods.

Photography is by Takt Studio.