Continuing our high-tech architecture series, Catherine Slessor looks at how the women in Team 4 helped shape the narrative of the movement.

All architecture is a leap into an unknowable future, but how will history regard high-tech? As a movement, it now does seem more like an ending than a beginning; a rarified sub-stratum of architectural geology, rather like German rococo churches, becoming ever more phantasmagorically fiddly until it ultimately implodes.

It also still has that slightly unhealthy, obsessive whiff of a teenage boy's bedroom, as a generation of postwar men who grew up playing with Mecanoo took their models out of the playroom and into the world.

High-tech was a supreme toys-for-the-boys moment. With its roots in Victorian engineering puissance spliced with the cartoon provocation of Reyner Banham and Cedric Price (architecture's Hunter S Thompson and Kingsley Amis), this is hardly surprising. The oil-rig-on-speed aesthetic of the Pompidou Centre still oozes testosterone, despite the Sisyphean challenge of its long term maintenance. Yet high-tech did have its unsung female proponents, who enabled, facilitated, supported and created.

Unpicking and defining their contributions is a slightly delicate business. But now, with the benefit of time passed, when the dutiful official histories have become played out, like cracked records, a more nuanced, egalitarian and, indeed, speculative perspective is finally possible. PhD candidates are doubtless doggedly whirring in the archives as we speak.

High-tech did have its unsung female proponents, who enabled, facilitated, supported and created

So who were the women of high-tech? There's a famous photo of Team 4, dating from mid 60s showing the young titans of Norman Foster and Richard Rogers, with Wendy Foster (née Cheesman) and Su Rogers (née Brumwell) sitting on their knees, like children in Santa's grotto. It's an image of youthful exuberance and ambition, the world at their feet, yet the power dynamics of women protectively balanced on men's knees are still subtly apparent.

Cheesman and Brumwell were the "other" members of Team 4 and the first wives of Foster and Rogers. As part of the collective which designed the first recognisably high-tech building in the UK, the Reliance Controls factory in Swindon, their contributions helped to pave the way for high-tech's eventual ascendency and the rise to fame of their partners. 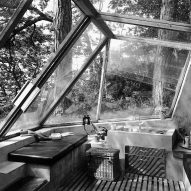 Such contributions were not just creative. Family contacts provided jobs, succour and support. Su Rogers was the daughter of Marcus Brumwell, who ran the Design Research Unit (DRU), an integrated design service established in 1943 to tackle the demands of postwar reconstruction. Its first head had been the critic and historian Herbert Read, who recruited luminaries such as industrial designer Misha Black, engineer Felix Samuely and architect Frederick Gibberd.

The Brumwells provided Team 4 with its first commission, Creek Vean, a country house in Cornwall, selling a Mondrian painting in order to fund the project. And when Team 4 disbanded in 1967, Richard and Su Rogers were invited to work in association with DRU, giving them valuable breathing space and a source of income.

Neatly spanning the four years from the onset of Beatlemania to the Summer of Love, the enigmatic and anonymous sounding Team 4 was a calculated riposte to the cult of the individual, though ironically it was incubating what were to become two of British architecture's most powerful and conspicuous individuals. Foster and Rogers had cemented their professional relationship during post graduate studies at Yale and decided to work together on their return to the UK.

Wendy Foster also studied at the Yale, while Su Rogers, though not formally an architect, brought urbanism skills and a sociological grounding from her time at the London School of Economics. The founding members also included Wendy's older sister Georgie Wolton, a former girlfriend of Rogers, and another key influence and enabler.

Trained at the AA and the only qualified architect in the group, Wolton effectively enabled the practice to function from one room in Wendy Foster's north London flat.

Wolton left Team 4 and went on to practise on her own, in a way that suggests she had a talent for greater things, had the tenor of the times had been less reactionary. Influenced by the domestic projects of the Eames, Mies and Philip Johnson, her 1969 Fieldhouse in the Surry Downs was the first dwelling in the UK to employ rusting Cor-ten steel as a structural material.

"I wanted it to get older and older and older," she explained. "It grew mould on all the neoprene gaskets and it was simply beautiful, with the green mould, the brown steel and this brown Spectrafloat glass". Cliff Road Studios, a building for artists in Camden, was equally accomplished. She later successfully turned her hand to landscape design.

The experience of designing Creek Vean encouraged Team 4 to look beyond brick and concrete to conceive of a different kind of architecture: lightweight, made of mass-produced components, flexible, adaptable and demountable. As a testbed for these radical principles, Reliance Controls proved opportune. The high-tech planets aligned and the rest, as they say, is history.

Yet with the completion of Reliance Controls, Team 4 appeared to have run its course and with no work, the supergroup duly disbanded. There followed a "difficult" Foster Rogers divorce, with Norman and Wendy Foster founding Foster Associates and Richard and Su Rogers forming the core of another new practice.

Until her death from cancer in 1989, Wendy Foster was involved with the all the major groundbreaking projects – Sainsbury Centre, Willis Faber, Hongkong and Shanghai Bank – that would make the Foster name and cement high-tech as the British national style du jour.

Writing about the Sainsbury Centre in a 1975 issue of Architectural Design (AD), she chose to emphasise architecture's collaborative possibilities rather than its predilection for the lone genius: "Skydivers hold hands to form a circle. Every link is of equal importance, every action a chain reaction. We liaise in this way with a team of clients, architects, engineers, quantity surveyors, model makers and photographers from day one".

In the same issue of AD, which focused on the experiences of women working in architecture, we also catch up with Su Rogers, now divorced from Richard (more often than not the fate of first wives) and heading up a unit at the AA.

Interviewed about her time in Team 4 she asserts that: "I feel competent as a designer, but I think my contribution to any office was at the critical level rather than the creative level, and that's where that partnership was successful, from my point of view, because one could work as a catalyst, within a group of architects."

High-tech's gradual ebbing from public and architectural consciousness was much less visceral than modernism's very public consignment to history. There was no Pruitt Igoe moment with the wrecking ball confected for posterity by self-serving cultural historians.

Instead, as the millennium dawned, the party moved elsewhere and the boys quietly put their toys away. But the experiences of Wolton, and the "other" Foster and Rogers still resonate, in shaping the narrative of high-tech's quixotic history.