Piazza Dell'Ufficio by Branch Studio Architects, which was named interior project of the year at Dezeen Awards 2019, teaches children about the power of design says judge Eva Jiricna in this movie.

Located in a suburb of Melbourne, the renovation of the administration offices of Caroline Chisholm College attempts to reduce visual barriers between staff and students.

The project, which also won the award for small workspace interior of the year, references Italian town squares and their ability to bring people together. The piazza-style room, now the hub of the office, can be accessed and used by everyone.

"We used an Italian piazza for the inspiration of the design of the project to create a space that would open up a dialogue between staff and students," explained Brad Wray, creative director and co-founder of Branch Studio Architects.

Piazza Dell'Ufficio, which translates from Italian to "office square", includes a variety of spaces that are almost entirely lined in slim cardboard tubes. 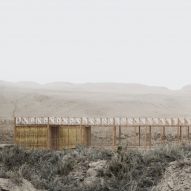 "The cardboard tubes were used as a cladding device, they were also used as a partition device but it was really just about creating a cohesion of space with a single materiality," said Wray.

Branch Studio Architects completely overhauled the "highly inefficient" 1970s offices, which had little natural light and were dated in appearance.

"It is a very simple intervention for very little money that gave the school something they could be proud of, which functions extremely well and teaches the children at a very early age the power of design," said Jiricna, who sat on the interiors master jury alongside Matali Crasset, Ab Rogers, Eero Koivisto and Yoko Choy.

Wray also touched on the inclusivity and affordability of the project in this movie produced by Dezeen.

"For us, it's really important that architecture is for everyone and not just for big developers and people with large budgets," said the creative director and co-founder.

Piazza Dell'Ufficio was named interiors project of the year at the Dezeen Awards party held at Ennismore Sessions House in London on 30 October.

Photography is by Peter Clarke