Architecture studio Rombout Frieling Lab and Research Institutes of Sweden have created the Station of Being as a prototype bus stop for use in the Arctic region, which uses sound and light to alert passengers to approaching buses.

The bus stop in Umeå, Sweden, was designed to improve the waiting conditions for passengers using public transport in cold weather conditions within the Arctic region.

It uses lights and sounds to alert passengers to approaching buses so that they can relax and shelter from the wind while waiting rather than constantly having to keep a look out.

"Waiting for the bus can be an annoying experience," said Rombout Frieling, founder of Eindhoven studio Rombout Frieling Lab. "You have to continuously be on the lookout in order to ensure you do not miss the bus."

"Instead, the Station of Being looks out for the bus for you – so that travellers can have 'time for just being', which was a clear need we identified among the commuters who work on the Science Park where the Station is located," he told Dezeen.

The bus stop was commissioned by the city of Umeå as a prototype and opened during the EU Arctic Forum, which was held in the city earlier this year.

It has a "smart roof" which contains lighting and speakers that are used to create different atmospheres dependent on the bus that is approaching.

"The sounds and lights indicate the destination of the bus," explained Frieling. "For instance, when glassy tones sound, the bus goes to the locally famous glass factory."

Rather than seating, the bus stop contains timber pods as Rombout Frieling Lab's research found that people often preferred to stand, or lean, rather than sit while waiting for a bus in the cold and snowy conditions.

The rotating pods are designed to protect the passengers from the wind and provide privacy if needed.

"In this work we found, for instance, that one of the reasons why people prefer their car above the bus, is the need for privacy and the need to zone off," said Frieling.

"This is one of the reason why we invented the wooden pods that hang from the ceiling of the station – the pods allow people to lean comfortably in their own 'cocoon', while they can also be rotated to create different settings: social or private."

The bus stop's roof and pods are made from local timber. They can be rotated to allow a snowplough to pass through the bus stop, so that it can easily be cleared in periods of heavy snowfall.

According to the studio it consumes the same amount of energy as a standard bus stop.

In the first couple of weeks after the bus stop's opening the studio recorded a 35 per cent increase in usage, with many passengers taking time to relax in the structure. 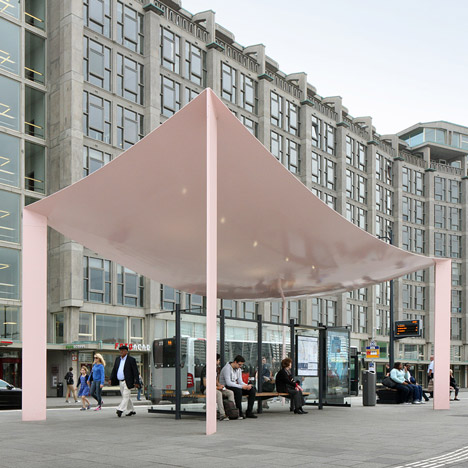 "The design is meant to get people out of their heads and into their bodies," said Frieling.

"We have seen people meditating, people hugging in pods together and people explicitly choosing to miss their bus and stay a bit longer," he continued.

"As in all my design projects, I find it important that people get a chance to escape the rational humdrum of the everyday, to do things differently and to engage their bodies. Some people find that fun and that is great."

Although Station of Being was designed specifically for the Arctic region, Frieling believes that it could be adapted for use in many different climates and environments.

"The Station was designed on the basis of a series of deep insights on the needs of travellers," he said.

"We suspect that many of these are very universal, like the need to have some transition time, and so we would love to apply innovations, for instance the spectacle of sound and light, to other areas and climates."

Photography is by Samuel Pettersson.