Visitors to Canada's Poisson Blanc regional park can rent this wooden cabin designed and built by Montreal architecture studio Atelier l'Abri, which has a triangular profile that takes cues from A-frame cottages.

Called The Point, the shelter is located in the Poisson Blanc regional park, a wildlife reserve roughly 120 kilometres North of Ottawa. The park is a popular destination for fishing and camping, and most visitors sleep in tents.

The compact wooden structure is meant to offer a more comfortable experience to guests. Described by the firm as a "micro-shelter", it is designed to accommodate up to four guests.

It is sited near the park's visitor centre, but only accessible via footpath – the hike out to the cabin takes about 10 minutes, according to the architects. The isolated cabin is in a wooded area overlooking Lac du Poisson Blanc, which is a large man-made reservoir formed when the nearby Rivière du Lièvre was dammed in 1928.

The roof's steep slope and angular construction make it stand out amongst its dense wooded setting.

"With its triangular geometry, the shelter offers a reinterpretation of the legendary A-frame popularised in North America in the 1950s," said Atelier l'Abri. "It was important for the designers to create a simple, almost sculptural structure that would provide functional and nature-oriented spaces."

The steep roof is clad in metal seam panels, a classic choice for the region's climate. The exterior cladding is cedar, and is intended to gain a silvery patina as the building ages. 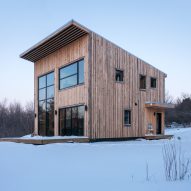 Atelier l'Abri designs Canadian cabin for carpenter to build himself

The interior space comprises a single volume, with a kitchenette, living area, and dining table on the ground level, and a sleeping loft perched above that is suspended by steel rods.

In addition to the loft, the dining table can be lowered, to create another bed that brings the total number of possible guests up to four.

The decor is kept as simple as possible, lending a rustic feel to the cabin. "The interior spaces are minimal and bathed in natural light," said the architects.

At the front of the cabin, a suspended lounge chair hangs in front of a floor-to-ceiling window, offering views of the nearby lake. "The focal point of the refuge is the large bay window that offers uninterrupted views of the forest and reservoir below," said the studio.

A wood-burning stove occupies a corner of the space, making the cottage inhabitable year-round. Outside, part of the roof that is too low to stand under creates a triangular nook for stacking firewood.

Just outside the front door, there is a covered deck screened by vertical wooden rods. "Leaning on the main volume, the covered terrace becomes the ideal place to continue to enjoy the outdoors when the temperature is less favourable," said Atelier l'Abri.

Atelier l'Abri is a Montreal-based architecture studio, but also holds a general contractor's license. They used an in-house team to build the cabin, which gave them more control over construction details and quality. According to the architects, one of the main challenges was building on such a remote site.

Although the Point is the first cabin-style accommodation in the vast park, Atelier l'Abri is currently working on another similar shelter nearby, which will be larger and accommodate a few extra guests. Other projects by the emerging studio include a home designed for a carpenter to build himself, and a complete overhaul of a residence in Montreal's Plateau Mont-Royal neighbourhood.

Photography is by Jack Jérôme, unless otherwise indicated.