Architecture studio CAN has added a blue and white striped extension to a Victorian terrace in London, which features a statement pink curtain.

CAN extended and renovated the house's kitchen adding a side extension that expanded the room to fill the entire width of the site and a small rear extension. The studio named the project A Brockley Side.

The studio used different materials to define the three volumes – the original building and two extension – on the rear facade.

The small white rear extension has slatted-timber stripes painted in blue to create a striped look. The colour was chosen to complement both the exterior patio and resin floor inside.

"The blue was a happy medium between the dark blue patio and light grey used elsewhere," Mat Barnes, founder of CAN, told Dezeen.

The side extension, which has a glazed roof, is finished with a white ribbed facade. Its boundary wall is clad in square, glossy white tiles, which continue inside behind a shelf of plants that runs towards the back of the extension.

The studio installed a large, glazed pivot door at the rear of the room to give unobstructed views to the garden.

A pink curtain can be drawn for shading and privacy, and adds a "visual counterpoint" to the extension's pastel colour palette.

On the wall beside the pivot door, the studio placed a strip of tiles to reference where the previous exterior wall used to be. 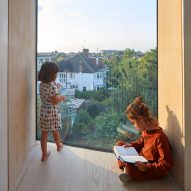 "We wanted to visually separate the new from the existing when you look down the new side extension towards the garden," Barnes explained. "The tiles also frame the window better and the glossy finish bounces light around."

The existing stepped decking on the side of the previous extension was removed, and the kitchen and dining area extended to meet the garden wall.

A new glazed roof with vertical fins encloses the top of the space.

The kitchen counter was relocated to the centre of the extension and faces a new breakfast perch. The expansion also made room for sofa seating under the glazed roof.

Throughout the space the floor was sunk to be level with the patio, giving the extension a higher ceiling height than the main house.

For the interior, whitewashed Douglas fir, which has naturally occurring pink hues, has been used for the furniture, cupboards and roof fins. CAN chose the pink curtain to match the fir, whilst contrasting the blue panels on the exterior.

A white enamel top with a black-splatter pattern sits on top of the breakfast perch and kitchen counter.

Other London house extensions featurning Douglas-fir interiors include the black timber-clad A House for Four and Douglas House, which is named for the abundant use of the material.