Design studio Mira has invented an automated camera system for museums, sports arenas and other public venues that enables visitors to get the perfect shot for social media without the use of their personal devices.

The Mira Cam was created by Mira, an offshoot of the design firm Cactus, which works at the intersection of digital technology and physical architecture. Mira is based in Brooklyn and Miami.

Mira describes itself "as the world's first automated photography platform" designed to produce high-quality images of people in entertainment and cultural venues, along with other public spaces.

The system enables people to capture the "perfect selfie" for social media without using their personal cameras. Mira's ultimate aim is to encourage people to put down their cameras and be more mentally present in an experience.

The design team sought to invent a system in which "moments could be captured in a simple way, without disrupting the experience itself".

"The 'aha' moment for Mira came to us when we observed people inside amazing entertainment venues," said Noah Waxman, Mira co-founder and chief brand officer, in a media release. "They were so busy trying to capture the perfect Instagram shot that they failed to fully engage with their surroundings."

The Mira Cam system is designed to be "intuitive and simple". The automated, electric-powered cameras are affixed to walls, ceilings, floors and other surfaces, in areas where visitors would want to take a photo. The company also offers a freestanding version, noting that the cameras can be placed "just about anywhere". 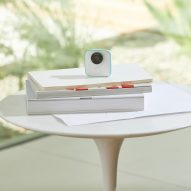 Google's new camera knows when to automatically take a picture

The cases are customised so that they blend into each setting. To ensure good lighting conditions, professional-grade flashes are incorporated throughout the space. Their positioning is informed by 3D studies of the environment.

"Mira installations are individually tailored to each environment and composition, and can even be branded with company logos or watermarks," the company said.

Visitors activate the camera using a wireless "trigger" device – either a QR code imprinted on a card or a bracelet fitted with radio-frequency identification (RFID) technology. Markers on the floor indicate ideal spots to snap a photo or shoot a short video.

"They can use their trigger to activate Mira in any space where the camera system is set up," the company said. "When the trigger is activated, a preview screen engages with a countdown that allows the visitor to set up the perfect shot."

The camera can generate photos and videos, including gifs and time-lapse videos. The images and videos are instantly sent to the guest's email address or mobile phone, in addition to being saved in a private, online gallery for later viewing.

"The digital album is a reminder of how you enjoyed the experience, rather than how much time and effort you had to spend documenting it," said Lucas Werthein, Mira co-founder and chief technology officer.

The system has already been installed in several venues, including New York's Slime Institute, a slime-related play space for kids, and the Color Factory, an interactive exhibition that has been on view in multiple cities.

Other image-capturing technologies include the hands-free Clips camera from Google, which uses artificial intelligence to learn when to take a good shot, and the Shonin bodycam, which was designed to aid violent crime victims. The personal security camera is affixed to clothing and automatically uploads videos to the cloud.

Photography is by Mira.