Snap, the company behind Snapchat, has launched its second piece of hardware – a pared-back and pocket-sized drone called Pixy, designed for taking selfies.

Snap has aimed for accessibility with Pixy, which has a simple start button and mode dial instead of a controller, weighs a light 101 grams and has bright yellow plastic casing.

To recall the drone, users simply turn up their palm and it is prompted to land in their hand.

The company calls Pixy a "friendly flying camera" that functions as a companion to the Snapchat social media app. It comes six years after the launch of the company's first hardware product, Spectacles, which are still on the market.

"We first created Snapchat as a new way to use the camera for self-expression and communication," said Snap. "From Lenses to Spectacles, there are so many ways to share your perspective. Today, we're taking the power and magic of the Snap Camera to new heights."

Pixy has a front camera for capturing photos and videos, and a bottom camera for navigation. It flies on one of four preset flight paths that users select by turning a dial.

The Hover mode sees the drone float in front of the user, while Reveal pans the drone backwards and lifts it up slightly, to slowly bring the surroundings into view.

In Follow mode, Pixy trails the user as they move, while in Orbit, it soars high into the air and spins in a 360-degree circle around them.

In both the Hover and Follow modes, users put out their hand at any time to signal the drone to land on it, while in Orbit and Reveal, Pixy is designed to come back to its starting position and will signal with a green light when it's ready to dock on a palm. 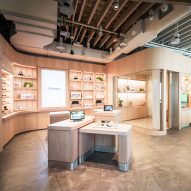 Pixy has 16 gigabytes of storage capacity, enough for around 100 videos or 1,000 photos, and transfers files wirelessly to a user's phone where it saves them in Snapchat Memories.

From there, users can apply Snapchat's editing tools, augmented-reality Lenses and music library, and then either share their creations within the app or export them to another platform.

The Snapchat app also allows users to tweak Pixy's settings, changing elements such as the flight times of different modes.

Snap has launched Pixy in the United States and France. Although the company is best known for the social network Snapchat, it now brands itself a "camera company", combining hardware and software innovations such as filters, augmented reality and editing functionality.

Its Spectacles launched in 2016 and are now on their third iteration, which features a more slim, angular metal frame.

One of the company's past experiments in augmented reality involved collaborating with Jeff Koons to place his famous Balloon Dog sculpture in places around the world – a project that saw the artwork vandalised in response by artist Sebastian Errazuriz.