Polish designer Wamhouse Studio has visualised four houses based on the shapes of corporate logos.

The series of four houses are based on the shape of the logos of some of the world's largest companies – sports brand Adidas along with car companies Chevrolet, Renault and Mitsubishi.

Karina Wiciak, founder of Wamhouse Studio started by designing Trihouse, which is based on the Adidas' Three Bars logo.

"The idea came to mind by accident," Wiciak told Dezeen. "One day I just saw in the logo a building. Then I thought that other logos are also a great inspiration."

The four-storey home is made from three bands of concrete divided by two large glass windows, which run up both facades and across the house's roof.

Wiciak visualised this two-storey house completely surrounded by water, and only accessible by boat.

The third house, called Rhombhouse, is based on carmaker Renault's Diamond logo, which was introduced in 1925.

While the fourth, based on Mitsubishi's three-diamond logo, is called Pyrahouse.

Wiciak chose to base the houses on these corporate logos as the shapes compliment the visualisation work they had previously created. 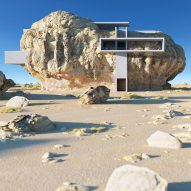 "Although I had ideas for other well-known logos, these logotypes suited my architectural style the most," Wiciak explained.

"I have ideas for subsequent house designs, maybe they will come into existence in the future."

Wiciak designed each of the houses to have a functioning interior and hopes that in the future one of the houses could be realised.

"I designed them for my own pleasure, so in a way it was fun, for me," she said.

"However, despite the fact that they are conceptual buildings, they are fully functional inside. It would be nice to build one of these houses sometime."

Earlier this year designer Antony Gibbon visualised a two-bedroom beneath a twisting ribbon-like roof, while Amey Kandalgoankar envisioned a house embedded into a giant boulder.