Netted balustrades, a tiled studio-cum-playroom and roof lights all feature in this renovated and extended Brooklyn home, designed by VonDalwig Architecture.

The Extended Townhouse is long and slender, measuring 19.5 feet wide and 42 foot long (5.9 metres wide by 12.80 metres long), and flanked by neighbours on either side.

VonDalwig Architecture was cautious that adding length at the back of the building could cause the interiors to be dark, so sought to find ways to bring in plenty of light.

A number of openings puncture the rear wall of the two-storey extension, which is clad in white render featuring linear markings. Among these are two glazed doors that open onto the back garden – one of which is topped with another window – an opening on the upper level. There are also three skylights.

Inside, the architects carved two voids into the floor of the addition to allow the natural light into the new rooms and the three levels of the existing house. 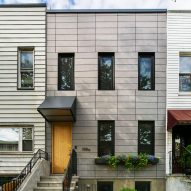 "In combination with well-placed exterior window openings and skylights, the house becomes an orchestrated series of views and relationships deconstructing the typical longitudinal organisation," said VonDalwig Architecture in a project description.

A studio workroom occupies the double-height space of the extension, and is covered completely in grey stone tiles that also form a slender sink. Next to this is the children's playroom, below the void in the floor above.

Black netting forms the balustrade wrapping the gap to offer glimpses to a secondary play space on the upper level.

Rather than following a traditional layout of bedrooms and living areas on different floors, the team mixed them up to better suit the lighting arrangement. A lounge adjoins the playroom on the ground level and the children's bedroom featuring two bunkbeds is placed at the front.

White-painted walls feature throughout, as part of a simple and neutral palette to keep the interiors light and airy, and provide continuity between the different levels.

Access from the street is via steps to the first floor, so this acts as the main level of the residence.  The door opens onto a second living room, adjoining a small reading nook that forms a connection to the kitchen. The material palette is continued from downstairs, with white cabinetry topped with grey stone.

At the rear of the second floor, the master bedroom is located in the existing structure and opens onto a roof terrace on top the extension. It also has an en-suite bathroom and dressing room, and another bedroom is also found on this floor.

VonDalwig Architecture's project is among a number of slender Brooklyn row houses that have recently been updated.

Others include the brick building updated by Barker Freeman Design Office and an overhaul by Bostudio, which included adding fibre-cement cladding and providing an open layout. 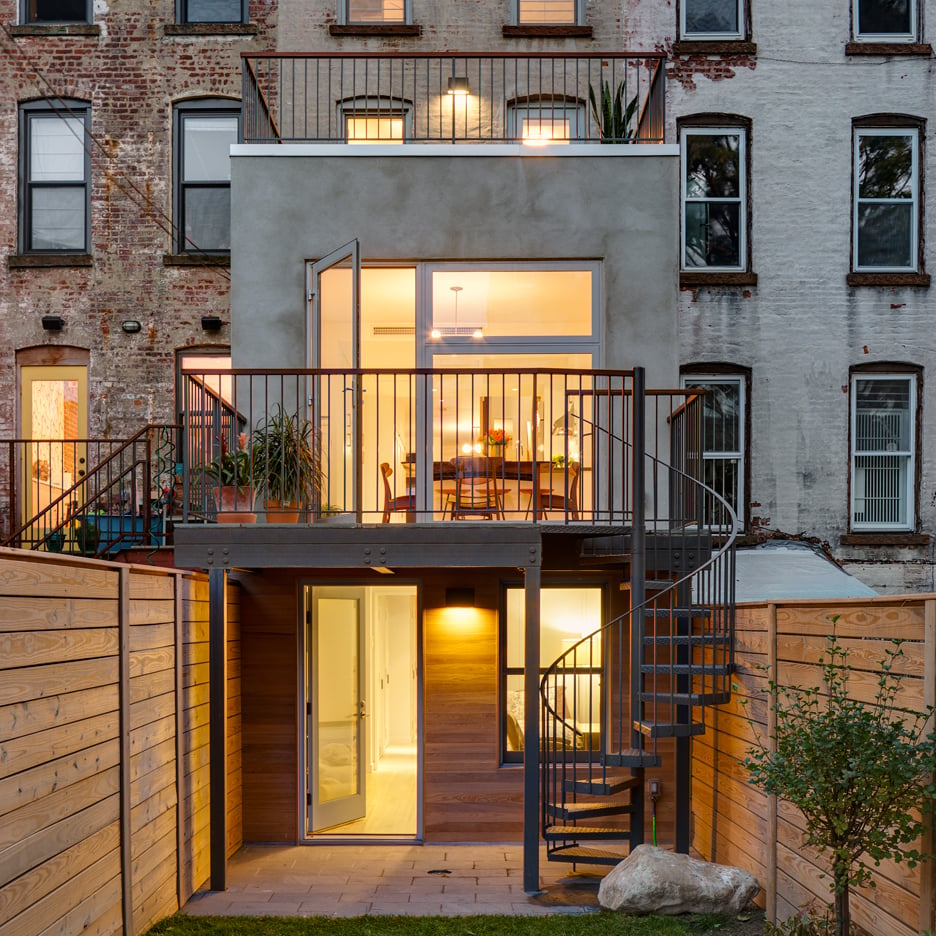