CEBRA has completed a cave-like prayer centre in Abu Dhabi housed in a landscape of jagged, rock-like forms.

Al Musallah prayer hall is also a new park for the city.

Commissioned by the city's Department of Culture and Tourism, the prayer centre is part of a wider masterplan for a site adjacent to the Qasr Al Hosn Fort – Abu Dhabi's oldest stone structure.

Drawing on the mud-crack patterns of Abu Dhabi's coastal desert landscape, the rock shapes rise out of a small pool of water.

Together they form a mixture of walkways, gardens, seating and even bollards, with the largest housing the spaces of the prayer complex.

"Along the transitional zone, the landscape changes from horizontal planes to slanting surfaces and gradually grows into actual buildings, culminating with the Musallah."

The prayer hall spaces themselves are a series of interconnected forms surrounded by water.

These ponds separate them from the  public park and provide a greater sense of privacy and seclusion.

"Walking from the open landscape of the park along the narrow passages between the 'rocks', the noise and bustling life of the city slowly fades away and visitors enter the cave-like entrance halls, where you can rest and talk before prayers," said the studio.

Separate sequences of spaces for men and women lead through wash areas into the two individual halls, which are oriented towards the Qibla – the direction Muslims pray towards 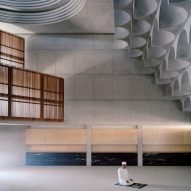 One wall is decorated with a relief inscribed in the concrete, and is visible through a window hidden  from the outside.

Glass corridors connect the different parts of the prayer centre.

In the prayer halls, copper has been used to clad the walls and the ceilings, creating what the studio call "endless reflections of light."

"It illustrates how man has always looked up into the skies, wondering and reflecting on one's own existence," said CEBRA.

The geometric mud-crack appearance of the exterior is mirrored internally, with a ceiling of suspended forms illuminated by both skylights and artificial hanging lights.

Based in both Aarhus, Denmark and Abu Dhabi, CEBRA was founded in 2001 by Mikkel Frost, Carsten Primdahl and Kolja Nielsen.

Another worship project coming soon to Abu Dhabi is a trio of multifaith temples on Saadiyat Island designed by Adjaye Associates.

Photography is by Mikkel Frost.