Situated in the Dmitrovskoe Shosse district, the development consists of numerous 16-story high-rise blocks arranged around two vast communal courtyards with a strip of green space and low-rise buildings in between.

While Mosproekt-3 dealt with the technical aspects of the buildings, Iosa Ghini Associati was approached to develop the design of the facades and landscaping.

The coloured street frontages and courtyards were created to counter what the studio call a sense of "monotony" in the suburbs. According to the studio they are combined with communal outdoor areas and play spaces to bring a more "human feel" to the scheme.

"An effective and creative 'colourful layer' on the facade of the building creates a tasteful contrast to the monotony of Moscow's suburban areas while open courtyards improve perception and quality of life and offer a great number of recreational functions," said the studio.

These coloured panels were created using a mixture of  "Kabanchik" – tiles typical of Soviet-era prefabricated tower blocks – as well as more modern fibre-cement panels, creating a variation of shades across each facade.

"Colour, used to create visual references and provide a certain sense of bearing, is transformed into an artistic device used for communication and most importantly the fruition and better identification of the urban fabric, the appreciation of its identity and cultural development," said the studio.

Gaps in the rows of high-rise buildings create multiple entry points into each block, and at the base of each tower a brightly-coloured portal directs residents into the lobby while also providing an area of shade. 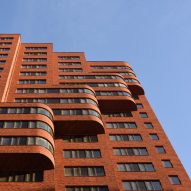 For the external spaces, areas were divided to suggest different uses, with a network of pathways and bike lanes providing routes both through the district and further afield.

"More than 22 hectares of communal courtyards are arranged based on a system of green areas and collective spaces, each with a specific purpose ranging from recreational zones and fitness facilities to common areas for socialising and outdoor leisure," said the studio.

Colours that reference the shades of the facades have been used to coat the surfaces of these play areas, demarcating them from the rest of the courtyard space.

Iosa Ghini Associati was established in 1990 by Massimo Iosa Ghini. Previous projects by the firm include a house in rural Italy informed by traditional farm buildings, and a series of new spaces for a hotel in Nice featuring tree-like columns.