Canadian practice Campos Studio has designed this home in Vancouver for a family with four children, featuring walls of reclaimed brick and an open stairwell filled with nooks, storage spaces and hangout spots.

The property called The Brick House is located in the Canadian city's Point Grey neighbourhood and takes its name from the main facade material – reclaimed bricks that give the home an aged look.

The Vancouver studio collaborated closely with the young family to design a home that would encourage playful interactions between its occupants.

"Through discussions with the couple, it became clear that they wanted a clean modern brick house, while at the same time it was important that the house encouraged play," said Campos Studio.

While still being playful, the clients wanted their home to feel like a contemporary, useful living space. The architects took cues from the work of Isamu Noguchi, a Japanese-American sculptor that extensively researched playgrounds, and produced many child-oriented sculptures, toys, and spaces.

Noguchi's work developed the concept of "non-committal" play structures. These spaces can be used for varied and open-ended games, as opposed to traditional designs like a see-saw or swing set, which suggest their use.

Campos Studio describes the outcome of this as a three-storey "toy chest" that runs up the centre of the home. This contains the home's main vertical circulation, but also hosts a series of hiding spaces, nooks for playing and reading, and bookshelves. 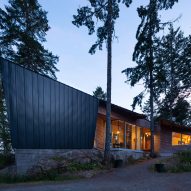 "It is not a playground of slides and ladders but rather a hidden playground, a playground disguised in the very structure of the house," said Campos Studio. "It is this playground that is so essential to the design of the house that it could be missed altogether without the imagination of a child."

Visitors enter the property at the intermediate level, into an open-plan kitchen. The wall of shelving backs up to it, providing storage across a marble slab that serves as the main working surface.

At the back of the home, the living room is a few steps down from the kitchen, providing a separate place to hang out, while still being connected visually. The dining room, meanwhile, is at the front of the home overlooking the street.

Minimal decor is offset by warmer accents such as an aged leather couch and a steel fireplace. The architects used European Oak for the wooden surfaces, which include accents walls, floors and furniture.

The lower level contains a family room, two bedrooms, and utility rooms. Because of a change in grade on the site, the playroom still enjoys plenty of natural light coming in from the side of the home.

Climbing up the central stairs brings visitors to an intermediate landing, where there is a reading bench with views to the back yard. "The spaces, along with the material choices, were designed to allow the children to transform formal living spaces into game areas," said Campos Studio.

A desk built into the central structure at the top of the stairs and is illuminated by a skylight. Three more bedrooms occupy this level, each with an en-suite bathroom.

Instead of building private decks off the bedrooms, the architects carved out a shared rooftop terrace, just off the top landing of the stair. "The formal essence of the brick house is an abstraction of a solid brick, with cavities cut out of it," Campos Studio said.

Campos Studio was founded in 2015 and completed The Brick House in 2017.

The firm has completed a number of projects throughout their home province, British Columbia, including a getaway for a woman and her dog in the rainforests of Vancouver Island, and a home refurbished for its owner's retirement, in collaboration with industrial designer Tom Chung.