British designer Morag Myerscough has created a brightly coloured cafe topped with plants to help improve the wellbeing of office workers in a revamped office building in London's Broadgate.

The heritage-listed 1980s building contains a mixture of offices and commercial premises surrounding a central atrium that connects Wilson Street on one side with Finsbury Avenue Square on the other.

Myerscough, who grew up close to Finsbury Park in north London, based the project on the principles of biophilia and the health benefits associated with spending time in nature.

"My fascination with how the Victorians made public parks for city workers to get fresh air at weekends inspired me to bring the park to the workplace at 1FA," she explained.

The installation combines Myerscough's signature use of bold colour with references to the architectural heritage of the Broadgate area.

The upper section of the structure containing the plants is shaped like a row of typical terraced houses to reflect the site's residential past. Six neon suns atop the structure are intended to "signify joy and energy".

The lower level housing the cafe is clad in bespoke ceramic tiles that provide a bold contrast to the bronze anodised cladding and black-painted structure of the building's refurbished interior.

The designer has used strong colour in many previous installations and artworks, including to brighten the wards of a children's hospital and to decorate the cafe of a London arts centre.

Myerscough oversaw the Designer Maker User exhibition that showcases the Design Museum's collection and archives at its new site in London's Kensington. 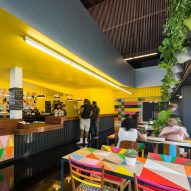 At the Design Museum, she included a rotating billboard displaying the exhibition's title on three different patterned backgrounds. Similar animated surfaces at the east and west entrances to 1FA welcome visitors with their changing patterns.

The installation at 1 FA extends across the whole atrium space, with hand-painted walls and seating continuing the colourful motifs around the perimeter of the space.

Myerscough worked with artist and designer Luke Morgan to design and fabricate tables, benches, planters and hand-painted seating with plump velvet cushions for a dining and relaxation area on one side of the space.

The refurbishment of 1 FA is part of a regenerative masterplan for the Broadgate area overseen by developers British Land and GIC.

Earlier this year, designer Paul Cocksedge created a wavy wooden seating installation in the public plaza outside 1 FA. The building's neighbour, 5 Broadgate, featured on the shortlist for the UK's worst building of 2016.