Kiki van Eijk and Joost van Bleiswijk – a couple who make work both together and separately – produced eight tile designs for MyEnergySkin.

There are two solar roof tiles and six solar facade tiles, all inspired by textures from nature or the built environment.

For the roof tiles, Kiki & Joost chose to emulate copper and iron, with a mottled pattern and a reflective finish that they say glitters "jewel-like" in the light.

For the facade tiles, they looked to a mix of sources. One, titled Paint, appears to have been streaked by a paintbrush.

Another, Rain, has an oxidised effect, while Tudor has a muddy brickwork pattern, and Leaves gives the impression that it is in the shadow of foliage. 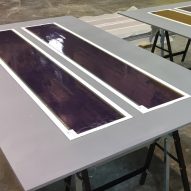 The Aquarel tile is softly washed with warm colour, while the Scratch tile looks as if it has weathered a beating.

Kiki & Joost said that the facade tiles, in particular, excite them, because building facades had typically been overlooked as a site for solar architecture.

They hope that this might change with the availability of tiles that are designed to be aesthetically pleasing and to fit with the urban landscape.

"While we are magically turning sunlight into electricity, we'll also thankfully make the world more beautiful," said the designers, who plan to use the product on their own studio facade.

Both the roof and facade tiles are made of textured tempered glass and have a rating of 120 watts peak per square metre.

Kiki & Joost's collection is the first to be produced by MyEnergySkin, which aims to make more aesthetic green-energy products.

The two designers met while studying at the Design Academy Eindhoven and have worked out of the same studio since then.

Van Eijk's past projects include the Civilized Primitives collection of sculptural furniture and the spliced-together Cut and Paste collection for Secondome.

Van Bleiswijk's include the Construction Lamp for Moooi and the Sketch collection of furniture with disjointed steel frames. Together, they have also produced rugs, furniture and glassware.