Designer Adam Nathaniel Furman has created a pair of chairs based on intimate parts of the body.

The name PHaB "is an acronym of all of the things that their shapes reference, with some of the letters referring to more than one word," said Furman, who described the chairs as "jubilant and adorable celebrations of the human body".

"Harnessing the subversive, affirmative and joyous powers of cuteness and the unexpectedly queer, the PHaB1&2 chairs are cheeky injections of figuration and sensuality, sweetness and light, into the conceptual minimalism of contemporary design aesthetics," he said.

The stackable chairs feature legs made of powder-coated steel tubes, with seats formed of painted plywood. They are intended to be used both in the home and in cafes and restaurants.

"There is a childish innocence that the pieces are referencing, in which the body – and the simple, ancient symbols we have used for millennia to represent them, ever since the first cave paintings – and its most obvious constituent parts, is a thing of joy and discovery, sweetness and fun," said Furman. 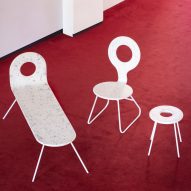 "[This is] a period of freedom prior to the shame that we are inculcated with by society about ourselves, our bodies, and our proclivities, as we grow older," he continued.

He added: "I do see this as analogous to how, prior to training in design school, many of us had wildly diverse, singular tastes that were derived from our backgrounds and our individual identities, but then through a process of education we were naturalised into the homogeneous language of contemporary design aesthetics."

The London-based designer described the chairs as a "manifesto project" that explore his interest in colour, cuteness and what he calls "queer aesthetics".

"Colour is probably the most powerful and fundamental way that a designer can create immediate and potent reactions in users, occupiers and observers," said Furman, who co-directs the Saturated Space research group on colour at the Architectural Association school in London.

"Cuteness is a way of imbuing objects with soul," he explained. "It is a contemporary form of the ancient practice of animism in which all things, natural and man-made, are seen as being just as alive as humans, with this being done by gifting them with human characteristics and traits."

Furman described queerness as "a relationship with accepted norms and mainstream aesthetics in which precedents, widely accepted value judgements, holy-cows that are considered above reproach, fads and dogmas are all distorted, played with, over-exaggerated and undermined in ways that do not reject them, but introduce the virus of new ideas that radically alter their make-up".

"It is a form of design-dragging in which what you thought you knew is still recognisable but is totally transformed," he added.

Furman developed the chairs with British fabricator Design & Making. He is now looking for a brand to licence the design.

Previous projects by Furman include a range of cabinets inspired by cartoons and a colourful, ornate collection of furniture he described as a "bourgeoise nightmare".

Photos are by Yeshen Venema with styling by Clare Nicolson.