Snøhetta has been granted planning permission to create a garden at New York's 550 Madison, which forms part of its overhaul of the postmodern tower.

Snøhetta's proposal for the indoor public garden on the ground floor of the 37-storey office building was approved by the New York City Planning Commission this week.

The garden is part of an updated proposal that the firm revealed in 2018, after a major backlash against its initial design resulted in the postmodern tower gaining landmark status.

The news marks the final stage of consent needed for the renovation, which received approval from New York's Landmarks Preservation Commission (LPC) in February 2019.

Snøhetta's garden will be accessed from the west side of 550 Madison, formerly known as the AT&T Building. The design reimagines 550 Madison's existing public area which previously housed cafe tables and chairs, and linked to the adjacent building at 717 5th Avenue.

The firm will rip out the existing curved glass roof covering the space and also remove annex building built inside, to create 50 per cent more room for the project.

A new, steel-and-glass roof supported by slender white columns will provide cover over the space and be a reference to the former roof.

An abundance of vegetation will feature inside with many evergreens and shrubs well suited to the climate in Northeastern US. "Over 40 trees will be planted where today there are none," Snøhetta said.

Greenery will also cover over a car park and truck dock, forming a buffer along the rear wall. 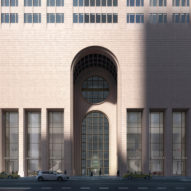 "Conceptually, the landscape responds to the canyon-like verticality of Midtown Manhattan, with a verdant, layered topography that lifts up along the west side of the garden, both minimising the impact of existing tower service infrastructure while providing a sense of being immersed in the garden," said Snøhetta.

The indoor garden will contain a feature water wall that will also help to buffer street commotion from the surroundings of Midtown Manhattan.

550 Madison's garden is a privately-owned public space (POPS) that is modelled on "pocket parks" elsewhere in the city, like the Modern Musem of Art's Sculpture Garden and the nearby Paley Park. Snøhetta claims the 550 Madison garden will be one of the "biggest" outdoor spaces in Midtown that is free for the public to use.

The garden will also be visible from inside the tower's office lobby, which will be renovated by Gensler.

"Privately-owned public spaces are a critical part of New York City's public realm," said Snøhetta's director of landscape architecture Michelle Delk. "Urban life thrives in and around spaces that allow us to connect with one another and to nature."

"We need to make the most of the spaces we already have and recognise that they are part of a network that contributes to the livelihood of the city," Delk added.

Johnson completed Madison in 1984 with John Burgee, 550 Madison. Formerly home to companies AT&T and Sony, it is regarded as the first skyscraper in the controversial postmodern style, which emerged in the late 1970s as an ideological reaction against the utopian ideals of modernism.

Snøhetta's original scheme, revealed in 2017, included plans to replace portions of the exterior with an undulated curtain wall of translucent glass, which prompted criticism and protests from the architecture industry. The team revised the proposal is more a stripped-back design and intends to restore many features to Johnson's original intention and sprucing up the existing brickwork.

A series of circular forms will also be included in the garden to take cues from Johnson's circular motifs at 550 Madison, like the large circular window defining its front entrance and the arches in the lobby.

Pavings will be laid in circular shapes to mark different areas in the public space, including The Living Room, The Waterfall Room, The Tree Room and The Picnic Room.

Construction on the garden will begin this year and the building's interior renovation is currently underway, and over 50 per cent complete.

In addition to 550 Madison, Snøhetta is also working on a waterfront community centre in Denmark, Ford's Research & Engineering Center, and a public library building in Charlotte, North Carolina.

Renderings are by Snøhetta and MOARE.