Snøhetta and WERK Arkitekter have released visuals of a community centre for water sports on the coast of Esbjerg, Denmark, which will be made from wood.

Named Lanternen, the circular facility is designed by Snøhetta and WERK Arkitekter to evoke "the geometry and craftmanship of boats" in a bid to set it apart from other buildings in the seaport town.

"The design developed together with the Danish architecture firm, WERK Arkitekter, pays homage to the maritime tradition," said Snøhetta.

"The purpose of the design is to develop a building that creates its own unique urban space which stands out from the city behind it."

Lanternen was the winning entry of a competition for the facility, and was chosen by the jury for its ambition to "support the community" and combine "innovative architecture with high functionality".

Once complete, it is hoped to enhance Esbjerg's connection to the sea, and become a community hub for maritime enthusiasts and the wider community.

Its form was designed by Snøhetta and WERK Arkitekter to be open and inclusive, and will allow visitors to enter from "every angle".

This feeling of openness will be enhanced by large windows placed all around its exterior that look out over the ocean. 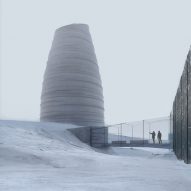 The windows are also intended to illuminate the building at night so that it resembles a lantern or lighthouse. This informed the projects' named, Lanternen, which is Danish for "the lantern".

"Like a lighthouse, the maritime centre has to face the sea and literally light up. Lanternen will be a new landmark for the Port of Esbjerg," said WERK Arkitekter.

One side of the maritime centre will be punctured by a large staircase that leads up onto a terrace on the first floor.

Sheltered by the building's circular form, this terrace will form the heart of Lanternen and provide a common space for visitors using the training facilities and the clubrooms positioned around its perimeter.

A second key area, referred to as the studios as "the hall", will be held ground floor. The hall will host the building's more practical facilities including a workshop and storage spaces.

It will lead out to the water edge through a large opening in the facade to allow visitors to carry out small boats and canoes, and will be lit by two large voids that puncture the terrace above.

"Our vision is to create a building where the rational and the poetic meet in a symbiosis," concluded Thomas Kock, creative director at WERK Arkitekter.

Founded in 1989 by Kjetil Trædal Thorsen and Craig Dykers, Snøhetta is an architecture practice with studios in Oslo and New York.

Other waterside buildings designed by the studio include an office that produces twice the amount of energy it uses and Europe's first underwater restaurant, which was shortlisted in the Interior design category for the Dezeen Awards 2019.

Visuals are by MIR.