A curved, golden mirror ideal for taking selfies is among the large light fixtures that Brooklyn designer Fernando Mastrangelo's In Good Company has placed into the courtyard of Brooklyn hub A/D/O.

Six designers from In Good Company, Mastrangelo's platform for emerging artists, were commissioned to create a piece for the exhibition called Glow Up.

"Each designer was challenged and commissioned to craft sculptures and chandeliers that interpret the concept of light in its many forms, the various ways that we interact with those forms, and the emotion we feel within those interactions," A/D/O said.

"Visitors navigating Glow Up are encouraged to look up to discover moments of warmth, and to look inward for moments of reflection."

Designer Nick Missel was influenced by the distortion of nature caused by fog or pollution. His work, Moon Wrap, is intended to resemble the moon as viewed through a haze. Its shapeless exterior is coupled with an underside cast in reflective chrome.

For On-Edge Marco Piscitelli took cues from street bollards and floodlights. His hanging fixture relies on ambient light to illuminate its high-vis and metallic surface. It casts its beam downwards lighting and warming those standing beneath it. 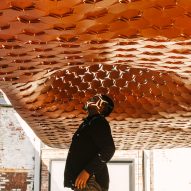 Also on display is Rattrap, an installation by Bailey Fontaine that comments on selfie culture. The suspended piece was constructed to replicate the design of cartoon-like rat traps.

It hangs on an angle revealing a gold mirror-clad underside meant to lure visitors to take picture of themselves, while its top surface covered with spikes is hidden from view.

Gregory Beson explores the relationship of light and time in his three lamps Salt / Light / Copper Triad. Made from Himalayan salt and copper the pieces measure time using the sun's position. To acknowledge the cycle of light and life the fixtures will decompose over the course of the exhibition.

Dis Truss Chandelier by Arcana wraps a commercial lighting truss over one of the showroom's structural I-beams. It asks visitors to think about industrial forms and materials that appear outside of their typical context.

The exhibition is one of a series of innovation and design-focused initiatives by the MINI-backed hub that coincide with the launch of the MINI Electric Vehicle in 2020. The company unveiled its first entirely electric car in 2019.

A/D/O is located inside an old warehouse that New York studio nArchitects turned into a creative hub, restaurant and tech startup incubator.

Previous installations in the Brooklyn space have included an immersive canopy work by designer and engineer Nassia Inglessis that uses a pulley system to invert the floor and ceiling as a visitor walks through it.

Photography is by Daniel Seung Lee.