Roger Scruton, the British conservative thinker, author and architecture critic who was co-chair of Building Better, Building Beautiful, has passed away at the age of 75.

Scruton, who died after a short battle with cancer, was a controversial figure throughout his career as a right-wing philosopher.

Author of The Aesthetics of Architecture and The Classical Vernacular: Architectural Principles in an Age of Nihilism, he delivered lectures and wrote extensively on his contempt for the work of modern architects and his passion for traditional architecture.

UK prime minister Boris Johnson led the tributes to Scruton, who received a knighthood in 2016, on Twitter.

"RIP Sir Roger Scruton," said Johnson. "We have lost the greatest modern conservative thinker – who not only had the guts to say what he thought but said it beautifully."

Architects and critics have mourned his passing with praise of his intellectual rigour and commitment to debate. Architecture critic Hugh Pearman said he was "sorry to hear" of Scruton's passing.

"Obviously we were not on the same page when it came to architecture or much else but in debate he was courteous and stimulating," Pearman said. "I'll miss the presence of his intellect."

Sorry to hear of the death of Sir Roger Scruton at 75, six months after he was diagnosed with cancer. Obviously we were not on the same page when it came to architecture or much else but in debate he was courteous and stimulating, and I'll miss the presence of his intellect.

"I disagreed with him on almost everything," said architect and author Sean Griffiths on Facebook.

"Some of the views he expressed in later years were beyond the pale for me. But I shared a platform with him once or twice and he was charming, courteous and clever," he added.

"Believe it or not, I met him in a nightclub in Swindon. It was one FAT designed and he was a friend of the man who owned it, a farmer from Wiltshire. Clients were more interesting in those days. He [Scruton] said he 'got' the design but didn't like it of course."

RIP Sir Roger Scruton. We have lost the greatest modern conservative thinker - who not only had the guts to say what he thought but said it beautifully.

A visit to Paris during the protests of 1968 pushed Scruton towards conservatism. As students ripped up cobblestones from the street he found himself turned off by their destructive impulses and talk of Marx.

"I was disgusted by it, and thought there must be a way back to the defence of western civilisation against these things," he said.

"That's when I became a conservative I knew I wanted to conserve things rather than pull them down."

Scruton was an author, journalist and academic

After his 1974 breakout book, Art and Imagination, he went on to write over 50 more, on topics including architecture, Wagner, conservatism, sexual desire, and wine. He also wrote several fiction novels.

Scruton was professor of aesthetics at Birkbeck College in London, before taking up a post at Boston University in the US.

A lover of classical architecture, Scruton was not impressed with contemporary architecture and decried the rise of the "starchitect".

"The new architecture, typified by Gehry's costly Guggenheim Museum in Bilbao, by Norman Foster's lopsided City Hall in London, by Richard Rogers' kitchen-utensil Lloyds Building, or by the shiny gadgets of Zaha Hadid, is designed to challenge the surrounding order and to stand out as the work of some inspired artist who does not build for people, but sculpts space for his own expressive ends," he said.

He was a columnist for The Times between 1983 and 1987, and wrote a wine column in the New Statesman.

His work as editor of right-wing periodical the Salisbury Review found fans in the Czech resistance movement against communism. Scruton learned the language and travelled there to set up underground universities.

Along with his support for the Conservatives, Scruton attracted much criticism from the left for his views on women, LGBT+ people, Muslims and Jews. He maintained there was a network of Jews in Budapest supporting George Soros and said that Islamophobia was a made-up word.

In the Telegraph he wrote that allowing gay couples to adopt would be child abuse and in an address to Rice University claimed there was "no such crime" as date rape. 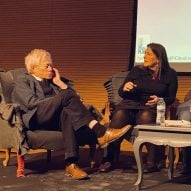 His appointment in November 2017 to chair of UK housing commission Building Better, Building Beautiful, led to consternation from some quarters of the UK architecture community, which accused the government of using Scruton to restart the "architectural culture war of the 1980s".

Scruton told Dezeen that he saw his mission as chair as that of protecting Britain from modern architects "imposing" their aesthetics, while addressing the housing crisis.

"I am hoping to reassure the people of Britain that building hundreds of thousands of new dwellings does not mean spoiling the beauty of their country," he said.

During his tenure he was criticised for for comments he made about the tragedy of the Grenfell Tower fire. He was dismissed in April 2018 after his comments published in a much-disputed piece published in the New Statesman.

The magazine later apologised, and Scruton returned as co-chair, although he said he was left deeply hurt by the architects who had "queue[d] up to pour their ritual denunciations on my head" in a "scandalous interview designed to ruin me".

Despite these troubles and his cancer diagnosis, Scruton found comfort in his last months by his recognition from the Czech parliament, who gave him the Medal of the Czech Senate for his work supporting dissidents 30 years ago.

He is survived by his wife and his children. "His family are hugely proud of him and of all his achievements," they said in a statement.