Philippe Starck has teamed up with French tableware brand Degrenne to redesign its range of kitchen tools and cutlery.

Starck's collaboration with the French brand began with the iconic L'Econome peeler – a product that was first introduced in 1923 by Le Thier knives, but is now produced by Degrenne.

The tool gained notoriety among amateur and professional cooks, and its design had remained unchanged since its introduction almost a century ago. But that changed this year, as Degrenne invited Starck to create his own version.

Named L'Econome by Starck, the revamped peeler features an ergonomic, streamlined handle, which Starck says was inspired by "the utensil's essence".

"My grandmother was a professor of economy," remembered Starck. "In her vegetable amphitheatre, she taught me economics, ecology, the beauty of the perfect spiral of a peel, the respect of the blade of her Econome."

"Then, the economy was no longer in fashion, fashion was at waste," he continued. "It did not work. The economy and the Econome have returned."

Inspired by his redesign of the peeler, Starck also introduced a full range of cutting utensils and cutlery that feature the same streamlined handles.

Called The Tools of the Kitchen, the collection features another vegetable peeler, four knives including a 10-centimetre paring knife, a "noble bird's beak" knife, a 20-centimetre kitchen knife and a bread knife.

Each is available in six colours of opaque plastic and composite, as well as stainless steel.

The cutlery collection, called L'e Starck, is available in the same finishes as the kitchen tools and in a range of original colours inspired by regional produce including Turnip, Artichoke and Black Truffle.

A folding knife and hollow knife are also included in the L'e Starck collection.

All of Starck's products for Degrenne are packaged in recyclable brown paper packaging that the brand says is "simple, familiar and elegant, echoing the history and nature of its content."

No stranger to the design of kitchen tools and utensils, Starck famously designed the Juicy Salif citrus squeezer for Italian brand Alessi in 1990. In an exclusive video interview with Alberto Alessi filmed by Dezeen in 2014, the president of the Italian design brand calls the stylish but impractical lemon squeezer "the most controversial lemon squeezer of the century".

Photography is by Philippe Garcia. 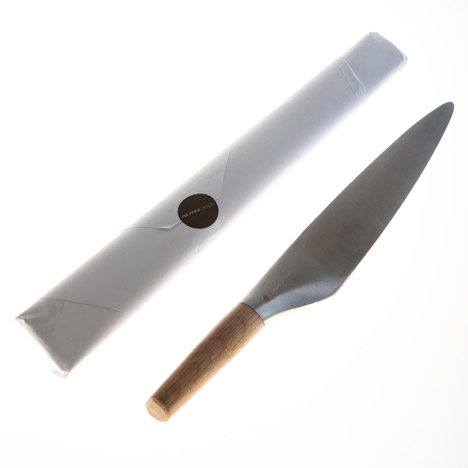