This new logo created by HemingwayDesign for the Dreamland theme park in Margate, England, combines traditional seaside colours with a minimalist aesthetic.

The studio headed by Wayne and Gerardine Hemingway developed the Dreamland 100 brand identity to accompany the amusement park's centennial celebrations throughout 2020.

HemingwayDesign has been working with Dreamland since its modernisation in 2015. For this significant anniversary it developed a new word mark that looks to the past as well as the future.

"HemingwayDesign's approach was to take influence from the retro style of Margate's seafront promenade and bring it up to date with a touch of modernist minimalism," said a statement from the studio.

The new logo translates the numerals into multicoloured blocks that echo the colourful aesthetic applied throughout the Dreamland site and its existing identity.

HemingwayDesign also produced a series of animated versions of the logo that evoke the motion of the park's traditional rides, including the retro Hurricane Jets and the Scenic Railway – the UK's oldest rollercoaster.

Dreamland's anniversary year will see it host several large-scale events at its 15,000-capacity venue, as well as presenting a programme of new art commissions. 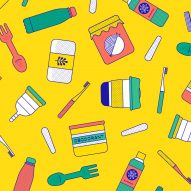 Following an £18 million investment in 2015 that funded the revival and reintroduction of many of its classic rides, the park went into administration in 2016.

It reopened again in 2017 after receiving a £25 million cash injection from a hedge fund. In 2019 the park recorded its most successful year since reopening, attracting more than 700,000 visitors.

A leisure venue has existed in Margate since the 1870s, although it was not until the 1920s that it was transformed into the Dreamland pleasure gardens and amusement park.

Margate itself has been a popular seaside resort for more than 200 years, with Margate Sands the nearest beach to London's East End.

Dreamland's refurbishment and other cultural initiatives, including the opening of the David Chipperfield-designed Turner Contemporary gallery in 2011, have helped reestablish it as a destination for day-trippers and holidaymakers from London and the surrounding region.