More than 100 trees will adorn the gridded facade of IKEA's city-centre Vienna Westbahnhof store, which will have no car parking spaces.

Currently under construction in the Austrian capital, the car-free IKEA store is designed by local studio Querkraft Architekten to address "radically changed customer and mobility behaviours".

IKEA Vienna Westbahnhof, which will have a grid-like form enveloped by greenery, will provide on-the-day delivery services and be easily accessible by foot or public transport.

"Consumer behaviour has been changing tremendously over the past years, and so has mobility behaviour," explained IKEA.

"More and more customers do not even think about carrying home their furniture themselves, they have things delivered home. Online ordering possibilities promote this behaviour," it said.

"Around two thirds of Viennese people living in the inner city districts of Vienna do not even have a car any more. They come by public transport, walk, ride bicycles or take a scooter. IKEA Vienna Westbahnhof serves all these changed behaviours."

IKEA Vienna Westbahnhof is being built at the end of Mariahilferstrasse, a predominant shopping street in the city where OMA is also developing The Link department store and hotel.

Once complete, it will give customers the option to either take home products by foot or public transport, or have items delivered home on the same day. IKEA hopes it will be their greenest store, supporting the company's sustainability ambitions and commitment "to becoming a circular business by 2030". 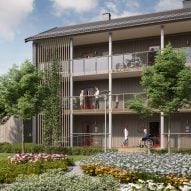 According to the IKEA, Querkraft Architekten's design for the gridded structure of building is modelled on a bookshelf and will be built from steel and concrete. Its facade will be composed of a mix of terraces, open spaces and expanded rooms to cater for transparency and flexibility.

Another key reason behind the store's grid-like structure is to also provide the building with space to grow trees on every level.

IKEA hopes to incorporate at least 160 trees in this way, projecting it "will lower temperature at the building by at least minus two degrees celsius" while also helping to purify the air for its surroundings.

Inside, the first four storeys will host IKEA products. However, unconventionally a hostel with 345 beds will occupy its two upper levels alongside a publicly accessible roof garden and restaurants.

A central void will run from the ground level to the roof terrace to allow visitors to easily and quickly access the spaces. IKEA hopes this will help ensure that the building becomes an "iconic meeting place in Vienna".

"IKEA Vienna Westbahnhof together with an innovative, exciting hospitality concept and rooftop shall become a true experience," concluded the company.

Founded by Ingvar Kamprad in 1943, IKEA is a Swedish furniture and homeware giant that also has its own research lab called Space10.

Other recent projects by the company include its collaboration with the Queen of Sweden on an offshoot of its modular BoKlok housing for the elderly, and its redesign of the tiny living pod on the Mars Desert Research Station in Utah.