Charlie Luxton Design has refurbished a neglected brick bungalow on the edge of a village in the Cotswolds to create a family home.

Designed by Oxfordshire-based Charlie Luxton Design the home, called Lamorna, draws on the appearance of the neighbouring agricultural structures to frame views out to an adjacent Area of Outstanding Natural Beauty.

"The knee-jerk reaction is to knock down the [bungalow] and start again to make the most of the plot in current housing terms," said the practice.

"We believe this is wrong. The embodied carbon and energy locked up in the existing structure needs to be valued and re-used despite government VAT incentives to do the opposite."

The original walls and concrete floor slab of the bungalow were retained, stripped back and re-insulated before being topped with the home's new roof structure, which provides greater height in the living spaces and adds an additional to part of the home..

"We had to add an entire new storey with a constraint on additional ridge-height, but doing that opened up fantastic views across the landscape," Charlie Luxton Design founder Charlie Luxton told Dezeen.

These new pitched-roof forms have been designed to reference the agricultural forms of the surrounding countryside buildings.

Entering past a small courtyard, a series of wooden portals create a "processional entrance" into the home, which is loosely L-shaped to look out at both the front courtyard and the south-facing garden.

"We created a new focus around the courtyard and entrance area to try and embellish this edge of the village/town, urban/rural location and balance the two," explained Luxton.

Moving past the northeast-facing bedrooms, the kitchen and dining areas sit overlooking the garden to the south, where a wooden trellis covered with climbers and vines creates shade. 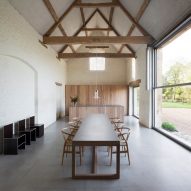 The living room is nestled in the more private heart of the home, looking out towards the front courtyard and a single-storey garage structure.

All of these spaces have new, higher roofs, while to the east a new storey has been added above the main bedrooms to house two children's rooms.

These upstairs bedrooms upstairs are decorated with a jungle theme, including tiger wallpaper that extends out into the corridor to "bring some life and fun and sunshine into that area of the house," said Luxton.

Charlie Luxton founded his studio in 2005, and runs it alongside his work presenter TV shows including Building the Dream.

In 2013, the practice collaborated with Takero Shimizaki to renovate a 1960s London home, giving it a dramatic black-painted finish.

Photography is by Ed RS Aves.