A run-down barn that was once used for storing grain now houses additional office space for the Cotswolds-based staff of architecture practice Richard Parr Associates.

The 95-square-metre workspace, which Richard Parr Associates has monikered Grain Loft Studio, is shortlisted in the small workspace interior of the year category in the 2020 Dezeen Awards.

It's situated amongst the green fields of Easter Park Farm in the Cotswolds, which was created as part of the Woodchester Park Estate in the middle of the 19th century.

An old hayloft, cowshed, bullpen and dairy barn on the farm had already been converted into office space for the practice, but as the number of employees has begun to steadily increase, they realised they were in need of extra room.

The practice's eponymous founder, Richard Parr, decided to make use of an abandoned barn.

Parr's office is up on the barn's first floor in what was formerly a loft store for grain.

After years of dilapidation, the practice could only save one of the room's original Cotswold stone walls – the rest have been replaced with expansive panels of glazing that offer views of a nearby National Trust park and Parr's own family home, which is also on the farm.

"It's been a joy to extend our studio space, providing much needed flexible workspace for our team," explained Parr, who has found using the Grain Loft Studio particularly handy during the coronavirus pandemic when many have been forced to work from home.

"With views out onto the surrounding valleys, the new studio has provided solace whilst working remotely from the team." 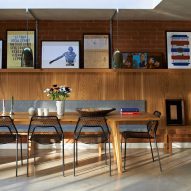 The room is topped by a pitched roof constructed from lime-washed beams of Douglas fir.

Directly beneath is a 2.5-metre-wide glass table surrounded by aluminium-frame chairs, where team members can sit and work with Parr throughout the day.

A doorway looks through to an informal workroom that's meant to have a darker, cosier feel.

The floor is clad with black recycled-rubber tiles, while the ceiling is clad with textured wood-wool panels.

One wall has been panelled with timber salvaged from a farmhouse in a neighbouring village that was once occupied by Soviet architect Berthold Lubetkin, which Parr hopes will act as a small homage to "the pioneer of British modernism".

In the corner of the room is a wood burner, in front of which a black leather sofa and armchairs have been placed. A kitchenette and small shower room are contained within a grooved timber volume towards the rear of the room.

An industrial steel staircase leads down to the barn's ground floor, which was previously just used as a cart bay but can now serve as a meeting room or breakout area.

It's simply dressed with a couple of curved bench seats that were carved from a single tree, and a white version of Finnish-American architect Eero Saarinen's signature Tulip table.

The practice preserved the space's existing cobbled walls but has covered the floor in stable-block pavers rescued from another building on the farm.

Richard Parr Associates was established in 2012 and works between offices in the Cotswolds and west London.

The practice's Grain Loft Studio will go head-to-head in the Dezeen Awards against projects such as 12 by Ortraum Architects, a music and ceramics studio that's nestled in the back garden of a house in Helsinki.