A house in Japan by Atelier Kento Eto is clad entirely in black corrugated metal with sliding doors that reveal a double-height hall with white walls.

Located in the town of Kadogawa in Miyazaki Prefecture, the square house combines living areas with a large open space to cater to the owner's frequent visits from friends.

Atelier Kento Eto put a lofty hall at the heart of the plan, flanked on either side by two more private wings.

Aside from the central sliding doors, just one window on to an upstairs bedroom marks the building's exterior.

Sliding wooden at either end of the central hall allow it to be opened up to the outside.

This through-route links the garden to the north with views out to a rural landscape to the south.

"By connecting the central hall and each room through openings on the walls and the ceilings, the boundaries between the rooms are obscured and openness is maximised within the limited volume," explained the studio.

While the layout on the ground floor has been kept relatively undefined, a series of different surfaces such as a raised, stage-like wooden area encourage different uses. 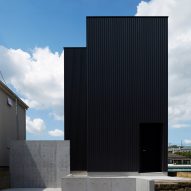 Thin steel bridges and large openings between rooms connects parts of the home both physically and visually.

The openings also encourage the flow of fresh air throughout the home.

The pale wooden beams of the home's structure have been left exposed on the interior.

Other Japanese houses with minimal exteriors include a black metal-clad home wrapped around a hidden courtyard in Tokyo by Apollo Architects and Associates, and the house built by Katsutoshi Sasaki for his family.