MIT engineers have found a new way to create aerospace-grade carbon-fibre composites using only one per cent of the energy of current methods, and none of the ovens and autoclaves.

The development comes from Massachusetts Institute of Technology engineers working with carbon nanotubes — hollow tubes of carbon atoms that are thinner than human hair but stronger than steel.

They found that sheets of these carbon nanotubes can be used "like an electric blanket" to fuse the composite materials for aeroplanes, spacecraft and other large structures such as wind turbines.

No ovens or pressure chambers

They describe these structures as being made of layers of different composite materials like a filo pastry.

Currently, fusing these materials securely means cooking them in giant ovens and sucking any air bubbles out in autoclaves – industrial pressure chambers.

This process only happens once the materials are moulded into the shape of a fuselage or other required part, necessitating warehouse-size facilities.

The MIT researchers' technique does away with the need for these ovens and autoclaves, and potentially speeds the whole process up.

They initially succeeded with the out-of-oven (OoO) technique — which requires wrapping the materials in ultra-thin carbon nanotube sheets and then applying an electric current to heat them up — in 2015.

This produced composites as strong as the materials made with traditional methods, using just one per cent of the energy.

However, perfecting the out-of-autoclave (OoA) technique proved harder, as the resulting material still contained air pockets that compromised its strength and lifespan.

Eventually the team succeeded by sandwiching a thin film of specially aligned carbon nanotubes between the layers of materials. When heated up, this filling draws the materials towards each other and squeezes out any voids.

Their latest results show a composite "as strong as the gold-standard autoclave process composite used for primary aerospace structures", according to Brian Wardle, professor of aeronautics and astronautics at MIT.

"Now we have this new material solution that can provide on-demand pressure where you need it," he continued.

"Beyond airplanes, most of the composite production in the world is composite pipes, for water, gas, oil, all the things that go in and out of our lives. This could make making all those things, without the oven and autoclave infrastructure, possible."

Plan to scale-up the experiment

On the OoO and OoA research, he worked with MIT postdoc Jeonyoon Lee, the project lead, and Seth Kessler of Metis Design Corporation, a Boston-based aerospace structural health monitoring company. 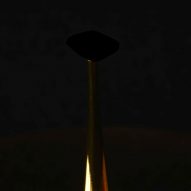 MIT creates blackest black that is darker than Vantablack

Together they have authored a paper on the subject in the journal Advanced Materials Interfaces.

Next, the researchers will be looking to scale up their pressure-generating carbon nanotube film to a size that can tackle industrial equipment. Their experiments to date have involved samples only a few centimetres wide.

Other recent experiments with carbon nanotubes have seen them used to make stronger concrete and temperature-regulating fabric.

They are a close cousin of wonder material graphene, which is often rolled up to make the nanotubes.