Work has halted on the 45 Broad Street skyscraper in Downtown Manhattan by New York architecture firm CetraRuddy, which was expected to become the second tallest building in the area.

Developer Madison Equities said that the construction of the supertall building, which began September 2017, was stopped due to "short-term conditions in the Lower Manhattan market."

When asked for clarification and the expected date to restart, Madison Equities declined to comment.

"Due to short-term conditions in the Lower Manhattan market, we have decided to delay on constructing the building in the near future," the developer told Dezeen.

Madison Equities said the skyscraper was reduced by 80 feet (24 metres) to accommodate Federal Aviation Administration (FAA) regulations. Department of Buildings (DOB) plans have been filed for the design, with a full New Building (NB) permit.

CetraRuddy's Downtown Manhattan design was unique in comparison to other glazed high-rises as it features thin bronze lines that stretch up its glass facades, in reference to the art deco movement.

The design was chosen to relate to art deco skyscrapers nearby, such as 70 Pine Street and 1 Wall Street, which were built in the 1930s and formed part of a backlash against glass dominating the tower construction in the city. 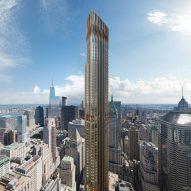 The news of the project stalling comes as reports reveal that sales of luxury units in Manhattan's Financial District area fell in 2019, according to local real estate publication The Real Deal, while the New York Times has predicted that the city as a whole will struggle with selling its oversupply of expensive, luxury apartments in the coming decade.

Manhattan is bursting with high-rise, luxury towers like the world's tallest residential skyscraper Central Park Tower, and One Vanderbilt is rising beside Grand Central Station by Kohn Pederson Fox.

Rendering is by CetraRuddy.