It will be located on a sloped plot overlooking an escarpment and the Ottawa River, and be close to Canada's National Holocaust Monument designed by Daniel Libeskind. It will replace Ottawa's current public library a 15-minute walk away.

The design is strongly influenced by the site's natural surroundings, with large expanses of glazing that will wrap around the building and provide vistas of the adjacent river and Gatineau Hills in Quebec.

"The building's design draws from Ottawa's rich history and natural beauty with a dynamic form reminiscent of the nearby Ottawa River," said Diamond Schmitt Architects.

Ontario limestone will clad much of the structure to relate to the escarpment below, while a wavy roofline is intended to offer a reference to Ottawa's riverfront.

"The curvilinear form of the roof on the building relates to the flow of the majestic Ottawa River," founding principal Donald Schmitt added in a video revealing the project.

OPL-LAC will measure 216,000-square-feet (20,067 square-metres) and include reading rooms, an archive and research centre, a children's area, exhibition and collections spaces, a genealogy centre and a cafe.

Inside, the spaces will be arranged around a central, wood-clad atrium. Other wood-lined interiors are intended to add warmth to the interiors. 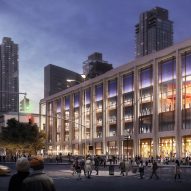 The library will be located within the glazed top storey and have views to Ottawa's Parliament Hill that houses government buildings and a visitor centre by Moriyama & Teshima Architects.

Additional areas in the building include an Indigenous Centre that will showcase the languages and cultures of Canada's indigenous peoples, known as the First Nations.

"The location at a cultural crossroads of a route that traces the three founding peoples – French, English and Indigenous – underscores the spirit of confluence in the building's design and the possibilities for these memory institutions in a modern facility to advance the Canadian story," said Schmitt.

OPL-LAC, which is expected to open in 2024, will have three different entrances: on the east and west sides, and one close to the Pimisi train station that services the Ottawa's light rail system.

Diamond Schmitt Architects and KWC Architects worked closely with the local community to design the project. The on-going public engagement programme is called Inspire555 as a nod to the project's site at 555 Albert Street.

Four public workshops were held over the course of a year to discuss ideas, and Ottawa residents and people from all parts of the country were encouraged to get involved.

Diamond Schmitt Architects was founded in 1975 by Schmitt and Jack Diamond, and has offices in Toronto, Vancouver and New York City. It has designed other buildings in Ottawa such as the National Arts Centre and a temporary home for Canada's Senate.

The firm is also involved in the redesign of the New York Philharmonic concert hall at Lincoln Center with local firm Tod Williams Billie Tsien.

Renderings are by Diamond Schmitt Architects.