Zaha Hadid Architects has revealed its proposal for four interconnected towers in Shenzhen, China, which will contain the open-plan headquarters for OPPO.

Set to break ground later this year, the amorphous OPPO headquarters is designed by Zaha Hadid Architects to accommodate the continual growth of the company dubbed as China's leading smartphone manufacturer.

The headquarters will measure 185,000-square-metres, and in a bid to echo the company's "commitment to connectivity", it will contain a number of large atriums surrounded by light-filled open-plan offices.

"OPPO launched their first phone in 2008, growing to become China's leading smartphone manufacturer and the fifth largest worldwide with over 40,000 employees in more than 40 countries," explained the studio.

"Accommodating this growth, OPPO's new headquarters will continue their commitment to connectivity through design."

Zaha Hadid Architects' proposal for the OPPO headquarters was the winning design in a international competition – seeing off competition from the likes of BIG, SOM and Rogers Stirk Harbour + Partners.

The building is slated for completion in 2025. The highest of its four towers will contain 42 storeys, reaching 200 metres in height.

The studio has dedicated two of the towers solely to open-plan office space. These towers will be linked by a 20-storey lobby and punctured by a number of large atriums.

Meanwhile, the remaining two towers will serve as external service structures and contain all the building's main circulatory routes.

This configuration is designed by Zaha Hadid Architects to create open, uninterrupted floor space throughout the offices, and encourage collaboration between different departments as a result. 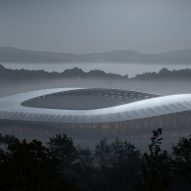 "Locating the towers' service cores externally frees the centre of each floor from obstructions; providing uninterrupted views throughout the building that will enhance interaction between employees," said the studio.

"The abundance of natural light, varied working environments and diversity of routes for staff and visitors to move through the building are all conducive to creative engagement and spontaneity."

Though different in size, the towers will be unified by their sinuous glass forms that taper inwards towards ground level.

This reduction in floor area is designed to cater for a large landscaped plaza planned at street level, which is hoped will provide "new civic space for the city". Here there will also be an art gallery, shops, restaurants and a direct link to Shenzhen's subway.

Once complete, the OPPO headquarters will also contain publicly accessible dining, leisure and entertainment facilities on the 10th floor, and a public viewpoint at roof level.

Zaha Hadid Architects is an international architecture studio founded in 1980 by the late Pritzker Prize-winning architect Zaha Hadid. Today, it is headed up by Patrik Schumacher who recently defended architecture's long-hours culture at Dezeen Day.

Elsewhere in China, the studio is developing Unicorn Island to support the growth of China's technology and research sectors, and has recently completed a giant starfish-shaped airport and 45-storey Leeza Soho skyscraper.