Architecture studio Space Encounters built a tile-clad office building on stilts in Amersfoort, the Netherlands, above an existing brick warehouse.

Called The Platform, the project is a homage to the superstructures designed by radical 1960s Italian practice Superstudio.

The collective, whose founders recently passed away, imagined the world encircled by gridded structures. They also produced a series of furniture in this shape, covered in white tiled effect.

It adds two floors of workspace without disturbing the building below.

This brick and concrete building, formerly a warehouse for the Prodent factory, currently houses online supermarket Picnic as well as a pop-up venue space.

The Platform spans the entire length of the warehouse, with supports only necessary around its edge.

"Constructively is is more like a bridge than a building - a typological crossover," said the studio.

Its slight overhang creates an arcade-like space at the front of the building.

"The white glazed ceramic tiles are traditionally used in industrial interiors because of their resilience," said the practice. 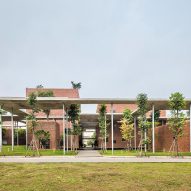 "By placing them on the facade, the enormous scale of the building becomes tactile and connects with the history of the place."

Slimline prefabricated floor panels were instead of pouring wet concrete above the warehouse, so the space below could still be occupied during construction.

A large concrete staircase leads up from the public square to The Platform.

A long balcony extends three metres over the edges of the warehouse to create a covered entrance area.

Workspaces are arranged around a double-height planted courtyard on the roof of the warehouse below.

Hardwood walls, bright red-painted steel supports at the building's edges and pastel-pink balustrades contrast with the white tiles of the exterior.

Service and bathroom spaces have been combined in separate blocks, to help emphasise the open feeling of the rest of the office space.

Previous workspace projects by Space Encounters include an office in Amsterdam that uses soft partitions of columns and curtains, and an office in Utrecht featuring planted divisions that provide privacy for workers.

Photography is by Lorenzo Zandri unless stated.